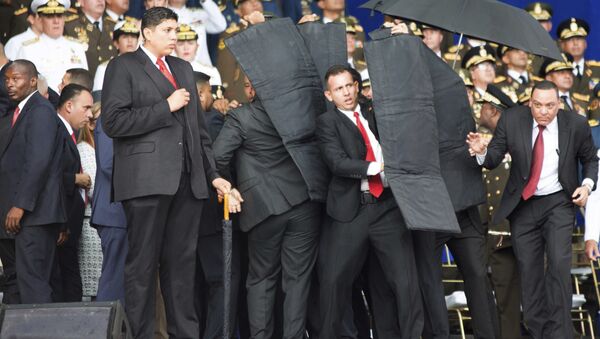 © AP Photo / Xinhua
Subscribe
International
India
Africa
On Saturday, the televised address of the Venezuelan President Nicolas Maduro was abruptly interrupted by the alleged attack of the drones loaded with explosives.

Venezuelan Information Minister Jorge Rodriguez said that several drones loaded with explosives targeted the stage, where Maduro had been giving a speech. As documented in the videotape of the address, the president and people around him on the stage suddenly looked up, while the participants of the demonstration rushed from the scene.

The country’s Information Minister confirmed that the incident during the demonstration was a failed attempt of assassination of the president.

However, firefighters at the scene disputed the government's version. Three Venezuelan firefighters told the Associated Press on condition of anonymity, because they were not authorized to discuss the case, the incident was actually a gas tank explosion inside an apartment. Smoke could be seen coming out of a building window at the site of the incident. The Venezuelan officers provided no further details to the Associated Press on how they had reached that conclusion.

WATCH: The Moment of Attempted Assassination of Venezuela’s Maduro Up Close
​Local media suggested earlier that some explosive-carrying drones failed to reach their targets, crashing in a residential area in the vicinity of the presidential event, causing fire and large plumes of smoke. A source in Venezuelan police told Sputnik on Saturday that authorities managed to down a drone which attacked President Nicolas Maduro during a demonstration.

According to the Associated Press, a previously unknown group, Soldiers in T-shirts, has claimed responsibility for an attempted attack on Venezuela's leader. Soldiers in T-shirts said in a tweet Saturday that it planned to fly two drones fitted with explosives at the president, but government forces shot them down before reaching its target.

Maduro Accuses Colombian Right-Wing Forces of Seeking Violence in Venezuela
Meanwhile, Ex-Military Aide to the Venezuelan government, Anthony Daquin said in an interview with NTN24 broadcaster that an alleged explosion of a gas tank occurred, adding that the venue of the presidential event was previously declared a no-fly zone for any aerial vehicles or aircrafts. The drones spotted near the stage with Nicolas Maduro were operated by the Venezuelan authorities, Anthony Daquin stressed.

A total of seven servicemen were injured in the incident, Venezuelan Information Minister Jorge Rodriguez said. Nicolas Maduro was unharmed in the attack.

Maduro accused of a failed assassination attempt the Venezuelan right-wing forces and Colombian rights, vowing to "hold accountable those responsible, who live abroad, especially in the United States."