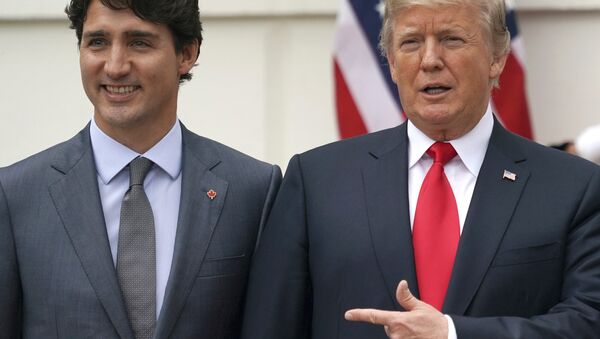 The Canadian economy produced staggering figures in June, the month in which Donald Trump's metal tariffs finally kicked in. Another issue to be solved is negotiating a new NAFTA deal, which has been a target of Donald Trump's attacks in recent months.

Canadian exports to the United States surged by 2.5 percent in June to a record $37.1 billion, mainly due to a hike in exports of passenger cars and light trucks, the government agency Statistics Canada announced on Friday.

Meanwhile, in June, imports from the US to Canada inched up by 0.3 percent to $32.9 billion. As a result, Canada's trade surplus with the United States grew from $3.3 billion in May to $4.1 billion.

Figures are less optimistic across the border: on Friday, the US Commerce Department reported a $2-billion trade deficit with Canada, which rose by 39.7 per cent from May.

'No Other Choice': Canada Imposes Response Tariffs on US Goods Amid Trade Row
This comes amid an increasingly bitter trade row between the North American trade partners, ignited by Washington's decision to hit aluminum and steel imports from Canada, Mexico, and the EU with crushing tariffs starting in June, citing national security concerns.

Canada hit back with $16.6 billion in retaliatory tariffs on dozens of US goods like beer kegs, coffee, whiskey and orange juice, prompting Donald Trump to threat to go ahead with more tariffs on Canadian cars and car parts.

Moreover, the US President has urged his northern allies to rewrite the quarter-century-old North American Free Trade Agreement (NAFTA), bashing its current version as "the worst trade deal" in US history. On Friday, Canada's US envoy David MacNaughton said that "there's nothing wrong with aspiring to get everything done by the end of August" amid reports that Washington and Mexico were close to striking a deal on auto issues.