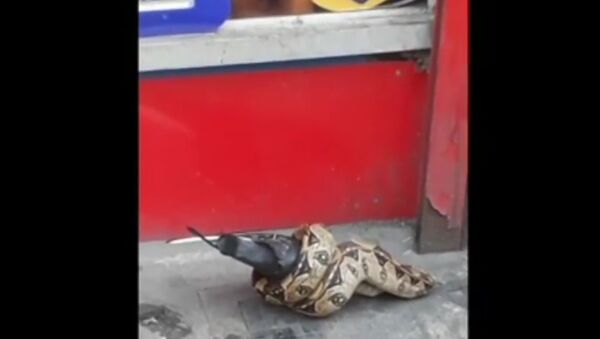 © Photo : YouTube/Kings World
Subscribe
International
India
Africa
Passers-by discovered a snake having gruesome dinner, wrapped around a bird, on a busy sidewalk in the UK’s capital. Photos and videos of the accident immediately went viral, but the question of how the reptile got loose remains open.

A long tropical reptile has been spotted on in Leytonstone, in east London in broad daylight. Dave Fawbert came across what he thought to be a python, when the cold blooded animal was devouring a pigeon.  The man, as cited by the BBC, said that one passer-by screamed, and soon a big crowd surrounded the snake, filming the exotic scene.

​Some also uploaded a video on the Internet.

Another witness, Rachel Garland, described the incident as “really cool.”

"I wasn't scared because it was moving so slowly and it was completely wrapped up in its pigeon. It was just trying to eat the pigeon, it wasn't taking any notice of all the people,” she told the BBC.

According to the witness, it lasted until some “guy picked it up by its tail as it was wrapped around the pigeon and put it in a cardboard box."

The snake, which proved to be a boa constrictor, has been taken to a wildlife center by an animal charity, which now seeks to find out how the reptile got to the street amid “such a dangerous situation." They call on those who might have information about it or the pet’s owner to step forward.

"Anything might have happened to him, he could have been run over by a car or attacked by another animal," the organization’s inspector Rebecca Bedson told the media.