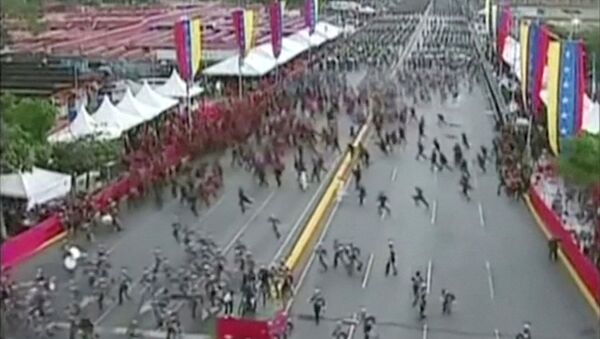 The official confirmed that the incident during the demonstration was a failed assassination attempt on the president, saying that several drones loaded with explosives attacked the stage.

However, a total of seven servicemen were injured in the attack, according to the minister.

“Right-wing forces are using violence in order to take over a place they could not get through the vote. Our brother-president Nicholas Maduro and the highest political and military leadership were not injured in the terrorist attack during the National Bolivarian Guard's event. They cannot get us,” Cabello wrote on Twitter.

Maduro TV Address Interrupted by Drone Assassination Attempt (VIDEO)
Earlier in the day, Maduro's televised address was abruptly interrupted. Prior to that, the president and people around him on the stage suddenly looked up, while the participants of the demonstration rushed from the tribune, as documented in the videotape of the address, released by local media outlets.

A number of media outlets reported that a drone loaded with C-4 explosives attacked the stage, from which the president was giving a speech.

In May, a presidential election was held in Venezuela. Maduro was re-elected with about 68 percent of the vote. A number of countries, such as the United States, Argentina, Spain, Germany, and the United Kingdom characterized the vote as either unfair or illegitimate.

Venezuela Entrusting Gold to Turkey Step Against Dollar's Hegemony - Politician
Venezuela has been recently mired a political and socioeconomic crisis, which many blame on dropping oil prices as well as the leadership’s decisions.

The nation experienced months of mass protests last year, which initially were a response to the Supreme Court’s decision to severely limit the parliament's legislative powers. The protests in Venezuela were further fueled by the election of a new lawmaking body, known as the Constituent Assembly, initiated by Maduro with the aim of rewriting the constitution.