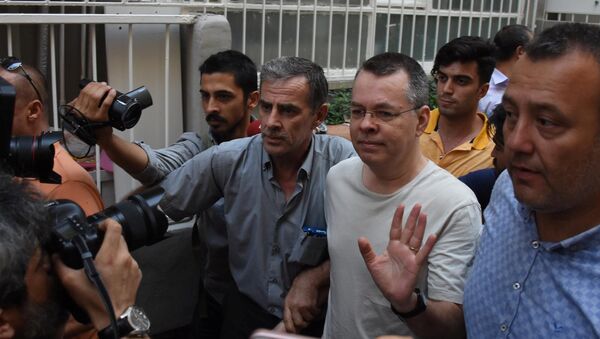 The US Secretary of State Mike Pompeo told Reuters on Saturday that the United States has every intention of working cooperatively with Turkey and that he hoped the issue of Americans detained in Turkey could be resolved very soon.

According to Reuters, asked if the issue of the arrested US Pastor threatened Turkey's membership of the North Atlantic Treaty Organization, Pompeo said that "Turkey is a NATO partner with whom the United States has every intention to continue to work with cooperatively."

"I had a constructive conversation with my counterpart yesterday. I made clear that it is well past time that pastor Brunson be free and permitted to return to the United States and that the others being held by Turkey also similarly be freed as well," Pompeo was quoted as saying by Reuters, adding that  "I am hopeful that in the coming days that we will see that occur."

US State Department Spokesperson Heather Nauert said that Mike Pompeo and Turkish Foreign Minister Mevlut Cavusoglu have agreed to keep trying to resolve the issues between Washington and Ankara.

US to Review Turkey's Trade Preferences After Ankara's Retaliation
"They spoke about a number of issues, and had a constructive conversation," Nauert said n a readout after a meeting between the senior diplomats in Singapore on Friday, adding that "They agreed to continue to try to resolve the issues between our two countries."

The meeting between Pompeo and Cavusoglu comes just days after the United States introduced new sanctions against senior Turkish officials over the ongoing detention of American pastor Andrew Brunson.

On Wednesday, the United States announced that it was imposing sanctions on Turkey's Justice Minister Abdulhamit Gul and Interior Minister Suleyman Soylu for their leading roles in Brunson's imprisonment, as well as alleged human rights abuses committed by Turkish state agencies. The US sanctions will freeze the two ministers' assets abroad and prohibit US citizens from engaging in any transactions with them.

US Sanctions on Turkey to Have 'Far-Reaching Consequences' - Analyst
Turkish officials including Treasury and Finance Minister Berat Albayrak have slammed the US actions.

Turkey jailed Brunson about two years ago for his alleged ties to the movement founded by Islamic cleric Fethullah Gulen, whom Ankara has accused of orchestrating the 2016 failed military coup.

The US pastor was released from a Turkish prison last week and placed under house arrest.