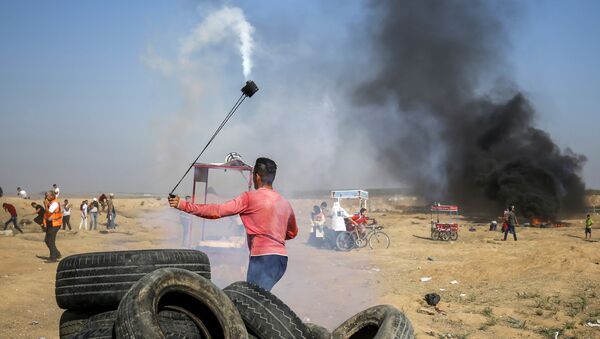 It is not the first incident when Israeli forces open fire at Palestinians in attempt to protect the border, as protesters try to cross the fence, throwing molotov cocktails and launching flaming balloons and kites.

"Moments ago, a terrorist squad launched arson balloons from the northern Gaza Strip into Israeli territory. In response, an IDF aircraft fired towards the squad," the army said in a statement.

The IDF said in another message that the squad had launched incendiary balloons from southern Gaza as well, with the Israeli forces firing back.

Earlier in the day, Gaza Health Ministry spokesman Ashraf Kidra said that the number of Palestinians injured in clashes with the Israeli forces on the Gaza border on Friday has increased to 220.

At the same time, the Palestinian WAFA news agency reported, citing the Health Ministry, Moath Ziad al-Sory, 15, who was injured during the demonstrations held to the east of the Bureij refugee camp the day before, died on Saturday.

Israel-Hamas Edge Closer to a Ceasefire Deal - Reports
On Thursday, Israel tightened the blockade of the Gaza Strip by introducing for an indefinite period of time a ban on the deliveries of fuel to the territory in response to Palestine's ongoing airborne arson attacks.

The Palestinians have been holding the Great March of Return – a campaign envisaging a series of protest actions – that was launched in the Gaza Strip, near the Israeli border, on March 30. The Great March of Return supporters protest the Gaza Strip siege and call for granting the Palestinian refugees opportunity to return to their homes in the former Palestinian territories that are now Israeli.