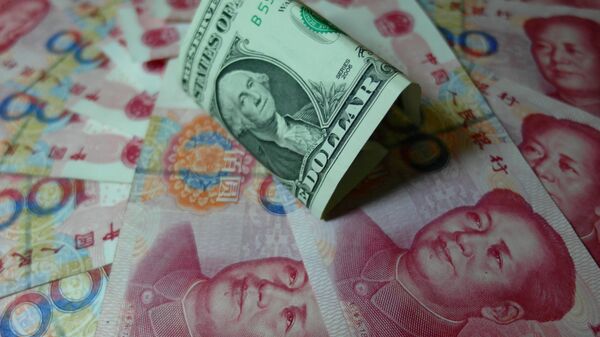 China's Central Bank stepped in to halt the yuan's slide Friday after the currency dropped to a 15-month low against the US dollar amid concerns over the escalating trade war between Washington and Beijing. Speaking to Sputnik, a respected Chinese economist explained how a weak yuan could threaten the prospects for China's economic growth.

The People's Bank stepped in to stop the yuan's drop notwithstanding the conventional wisdom that a weaker Chinese currency would neutralize the impact of US tariffs by making Chinese goods more competitive, as the currency slipped to 6.8 renminbi per dollar in Friday trading.

Goldman Sachs economists said the sliding yuan may have been seen as an intentional devaluation by the Trump administration amid its threats this week to slap China with a 25 percent tariff on $200 billion-worth of Chinese imports instead of the 10 percent figure proposed in July.

China Loses Spot as World's No.2 Stock Market Amid Sino-US Trade Row - Reports
Goldman Sachs did not attribute the long-term drop in the yuan's exchange rate to intentional actions by Beijing, saying that the phenomenon was caused by several objective economic factors. Among them was the Federal Reserve's decision to raise interest rates amid solid US economic growth rates, and the repatriation of profits by US companies thanks to Trump's tax reforms, all of which caused the value of the currencies of a number of developing countries to drop against the dollar. Investor sentiment about the Chinese-US trade conflict causing damage to China's economy also played a role in the yuan's slide, according to the investment bank.

Speaking to Sputnik China, Dr. Chen Fengying, economist and senior fellow at the China Institute of Contemporary International Relations, explained that Chinese authorities' efforts to shore up the yuan were understandable.

"For China, the long-term weakening of the yuan would be unprofitable. On the one hand, this phenomenon does help exporters to some extent. But on the other, for all enterprises associated with the import of oil, steel and other commodities, this creates difficulties," the economist explained.

"Chinese authorities simply cannot fully control the renminbi's exchange rate. And the tariffs imposed by the Trump administration have nothing to do with it," Chen added. "A long-term fall of the yuan will negatively affect the process of its internationalization," she said.

Ultimately, the analyst emphasized that the yuan's fall against the de-facto currency of global trade was a "temporary phenomenon, just like the dollar will not grow against other currencies forever. After all, the Trump administration plans to expand exports," she noted, and doing so would be difficult if the dollar was overvalued.

India to Impose Increased Tariffs on US Import Goods in Fall - Reports
On Friday, China proposed retaliatory tariffs on $60 billion-worth of US goods including everything from liquefied natural gas to aircraft following Trump's threat of 25 percent duties on $200 billion in Chinese imports. Washington and Beijing hit slapped one another with $34 billion-worth of tariffs in July, with Washington expected to hit China with another $16 billion in tariffs in the near future, which Beijing has already vowed to reciprocate.

Beijing has now imposed or threatened to impose tariffs on some $110 billion in US goods. This makes up a majority of the $130 billion-worth of goods China imported from the US in 2017. With the US trade deficit with China sitting at about $336 billion in 2017, President Trump has threatened to hit China with tariffs on all $500 billion in Chinese imports if necessary.