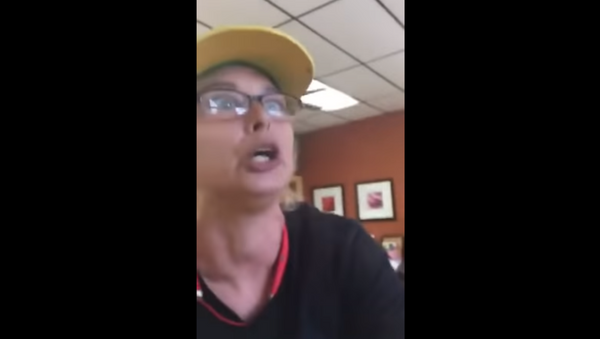 April Epperson, the manager of a Subway restaurant in Birmingham, Alabama, was fired from her post this week after she was caught on camera calling a customer a racial slur during a confrontation.

According to Birmingham news station WBRC, Epperson was fired on Thursday after management caught wind of a video posted on Facebook by Antuan Clark. The footage, which was recorded Tuesday, shows Epperson repeatedly screaming at Clark, telling him to leave the establishment.

The recording was captured moments after Epperson invited Clark to enter the restaurant to have a discussion about how he could not be on the grounds while his sister was working. Clark had gone to the Subway to offer his support to his sister, who was working her first day at the location.

While Clark is trying to reassess the situation, Epperson is seen talking on the phone with police. She later confronts Clark and tries to prevent him from recording the incident.

"I'm telling you right now, I'm fittin' to slap the goddamn phone out of your hands," Epperson says. Within seconds, the recording goes black as an audible struggle continues.

"I called you in here to have an adult conversation with you to stay out of my store because it's not a damn rest area. Bye. Have a good day," she adds. Clark responded to Epperson, saying that she was just trying to find an excuse to fire his sister as he'd calmly told her that he would follow her request.

By this time, a lone patron backs up Epperson and urges Clark to leave the store, as he'd been told by the manager to do so several times. Clark is eventually shoved out of the store by Epperson, after which she cracks the door open to yell out "f**king n***er." With the Subway doors locked, the patron taunts Clark and his sister via trash talking and flipping the bird.

Although Clark informed WBRC that Epperson had fired his sister on the spot, the manager told the station that she did not do so. She also tried to explain her behavior, stressing that she only acted in such a manner because she felt threatened.

Per Epperson, the racial slur slipped out by accident.

"It could have been a Mexican standing there. It popped out of my mouth that's what that Mexican would have got called. That white person would have got called that, too… I said the wrong word. I'm sorry for it. I am taking my punishment, and I'm walking away from it. I get that I screwed up. I'm a big girl. I can handle it. But I can't handle being called racist on national television over a slip up," she added.

In a statement released to Sputnik, Trent Evans and Matt Starr, owners of the Subway where the incident took place and other locations in the region, said that the behavior "does not reflect our core value to respect every individual."

"We welcome all guests to our restaurant, and given the unacceptable behavior of the manager, she no longer works for us. We take this very seriously and have suspended operations until the staff has completed retraining in proper guest interaction," the statement read.

According to AL.com, a sign did appear on the door of the Birmingham restaurant this week, indicating that the establishment was closed for employee training. No arrests were made over the confrontation.