'Flawed Policy': US Actions Toward Tehran Will Unify Iranians - Lecturer 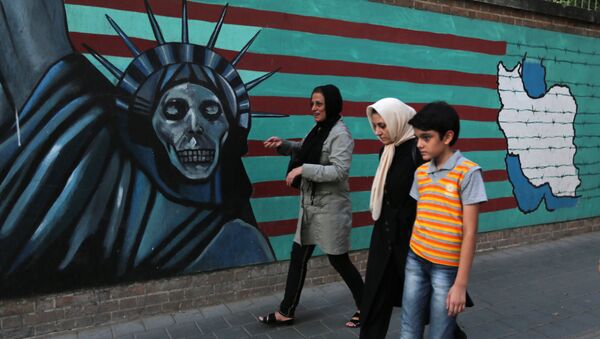 © AFP 2023 / ATTA KENARE
Subscribe
International
India
Africa
Iranian officials have spoken out against US President Donald Trump's offer to meet Iran's leader. Trump said he could meet President Hassan Rouhani with no preconditions at any time after the two traded hostile threats earlier this month.

Iranian state media quoted politicians as saying such talks would have no value and be a humiliation. In May, the US abandoned a deal which curbed Iran's nuclear activities in return for the lifting of sanctions. The US is deeply suspicious of Iranian activity in the Middle East and is an ally of Israel and Saudi Arabia, two of Iran's foes. Sputnik spoke to Edward Wastnidge, lecturer in politics & international studies at the Open University about the frictions between the two countries.

Sputnik: How will these tensions playout between the two leaders?

Iran’s Navy Assembles Near Mouth of Persian Gulf, US ‘Monitoring it Closely’
Edward Wastnidge: Well we all know by now it’s always difficult to predict where things will go with Trump in terms of Internatio0mal diplomacy. As we saw with North Korea he was threatening Fire and Fury one minute then engaging with the highest level of international summitry with the North Korean leader in Singapore the next.

Perhaps he thinks the same can happen with Iran, with the belief that Iran will be bought to his knees with the tightening of sanctions perhaps in the same way as North Korea was.

Trump is all about big impact grand gestures on the international stage. For Iran it’s about maintaining a sense of pride and not bowing to US pressure, and this has guided its international policy for almost 40 years now. In some ways the language of threats from the US and the pulling out of the nuclear deal has united factions within Iran behind the President.

Sputnik: What impact will this have on the Iran nuclear deal?

US Must ‘Show it is Trustworthy’ Before Iran Will Negotiate New Deal - Scholar
Edward Wastnidge: As far as the nuclear deal goes, it’s still intact, just. It’s still got European, Russian and Chinese support the deal as it exists. Whether it can survive the reposition of unilateral US sanctions remain to be seen. Iran wants to stay in it only if the remaining signatories can protect them in some way from US led sanctions.

Trump seems to think he can get a better deal, so for Iran there is no link between the nuclear deal and its own legitimate security concerns in the region.

Sputnik: What impact could this war of words between Iran and USA have on the region?

'Addicted to Sanctions': Iran Will Not Bow to US Pressure – Foreign Minister
Edward Wastnidge: When we saw President Trump’s exchange with Rouhani on twitter and his all caps response, naturally you worry about how this could escalate, I think neither side wants to see escalate further.

This is a flawed policy; you’ve only got to look at the mess left behind by the US in Iraq and numerous other interventions to see that. I think if anything the US actions in this regard will really unify Iranians behind their leaders.

The views and opinions expressed by Edward Wastnidge do not necessarily reflect those of Sputnik.