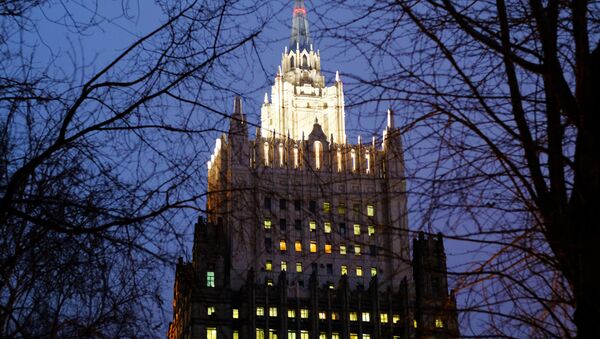 © Sputnik / Natalia Seliverstova
/
Go to the photo bank
Subscribe
The Russian Foreign Ministry has revealed that the reporters who were shot dead in the Central African Republic (CAR) had traveled to the country as tourists, adding that the purpose of their visit was unclear.

The Russian Embassy in CAR is working on transporting the bodies of the slain reporters to Russia, the ministry said, adding that the process will be completed in the coming days.

"The embassy is involved in the transportation of bodies to their homeland… I can say that this will be implemented in the coming days. The exact date will be reported to relatives," Foreign Ministry Spokeswoman Maria Zakharova said.

"As regards the purpose of the trip, the people who sent their employees there must answer this question. After requesting and receiving documents that were issued in the Embassy of the Central African Republic, I can only say that they traveled as tourists," Zakharova said, as aired by the Rossiya 24 broadcaster.

READ MORE: What We Know About the 3 Russian Journalists Killed in Central African Republic

Media reports about the murdered Russian journalists' investigation into activities of Russian private military companies (PMCs) in the Central African Republic (CAR) are nonsense, Russia has not been concealing the presence of its military advisers in the African country, Foreign Ministry's spokeswoman Maria Zakharova said.

The spokeswoman stressed that the journalists had not been heading to the deployment site of Russian advisers and had ignored warnings about the danger of leaving the zone controlled by local law enforcement agencies.

"The murdered Russian journalists, based on the location where their bodies were discovered, had not been heading to the place where the advisers work. Moreover, based on the information received from local officials, they ignored warnings that they were leaving the zone controlled by local law enforcement agencies," Zakharova said.

Russia’s Foreign Ministry earlier confirmed that on July 31, three people had been murdered near the city of Sibut. The slain had journalistic documents issued for Kyrill Radchenko, Alexander Rastorguev and Orkhan Dzhemal.

Their bodies have already been transferred to the capital of Bangui.

Russian Journalists Union Probing Deaths of Russian Reporters in CAR
The UN Multidimensional Integrated Stabilization Mission in the Central African Republic (MINUSCA) will dispatch police officers to the city of Sibut later on Wednesday to assist the investigation into the murder of Russian journalists, MINUSCA spokesman Vladimir Monteiro told Sputnik.

On Tuesday, the Russian Foreign Ministry confirmed that three people had been killed near the city of Sibut in the Central African Republic on Monday night. Journalistic documents issued for Russian nationals Kyrill Radchenko, Alexander Rastorguev and Orkhan Dzhemal were found with the bodies.

"The only thing I can say is that members of the UN police are traveling today from Bangui to Sibut to assist Central African Police with the investigations into the three bodies found yesterday," Monteiro said.

The official added that the bodies of the journalists had been transported to the CAR capital of Bangui.

Russian opposition figure Mikhail Khodorkovsky’s investigative media confirmed that it had sent a film crew to the Central African Republic, comprised of Radchenko, Rastorguev, and Dzhemal. The media had lost touch with these journalists after their last contact late on Sunday.