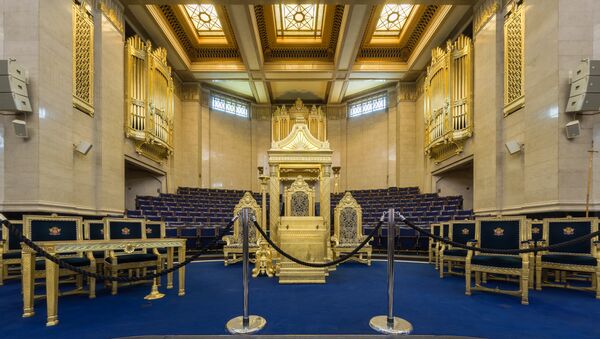 The male-only society has reportedly broken from three-centuries-long tradition by allowing transgender women to join the brotherhood, The Times reported, citing its new policy.

In new guidance issued to its 200,000 members, the United Grand Lodge of England (UGLE) stated that transgender men were encouraged to join Freemasonry, while trans women were welcome to remain members – if they underwent gender reassignment after joining the brotherhood as men.

Seems like transmen are eligible if they have undergone ‘gender reassignment’. Whatever that means in this world. pic.twitter.com/4Ko9QUJUoQ

Some traditions, however, remain: cisgender women are still not allowed to join the secret society.  As a single-sex society, masonic lodges are exempt from sexual discrimination legislation on admissions criteria, but the Gender Recognition Act of 2004 and the Equality Act of 2010 prevents Freemasons from leaving transgender men and women out of the brotherhood.

As the news broke, social media erupted with confusion over the allegedly updated rules:

I follow this and even I am getting confused. Are freemasons saying biological sex is their criterion for membership regardless of if someone is trans?

Some couldn’t simply understand why “biological females” who call themselves women were the only group excluded from the list of candidates who can join the fraternity:

Oh my sides…. men who join the Freemasons can become women and they won’t chuck em out but actual women…. “no way chicks. Get away from man door”. All. The. Lols. https://t.co/nqgpVtttiN

Inevitably someone asked Lord about this. They replied: yes, their Freemason’s lodge was only open to men, but anyone who transitioned (trans women) after joining could stay. And trans men could join. So inclusive! To everyone except us vagina-owners who still present as women!

So, men, and all trans people (m or f) can join the Freemasons but women cannot🤔 Sounds totally fair and not misogynistic or regressive at all… just must have a real/imagined/or surgical penis, right? Got it.

Others poked fun at the guidance of the Grand Lodge:

Hi @UGLE_GrandLodge one of yr members @edwardlord says he supports trans men joining the Freemasons. I self-ID as a man one day a week. I haven’t changed my appearance but feel my inner essence is definitely male. May I come along to a meeting? Look forward to hearing from you.

Freemasonry or Masonry, founded in London in 1717, is the largest and most widely recognized brotherhood in the world. Its origins trace back to the fraternities of medieval stonemasons, who used code words and secret symbols to recognize each other’s legitimacy.