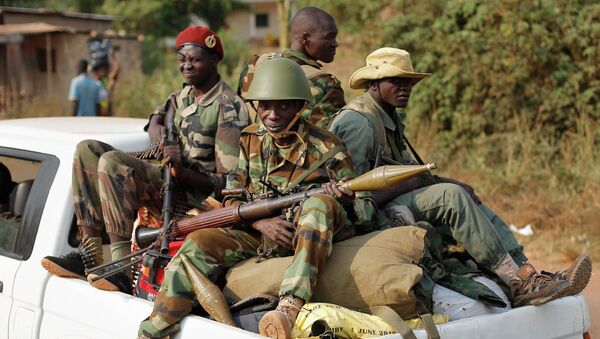 Three individuals, allegedly Russian journalists, have been found dead in the war-torn African country, AFP has reported. Russian diplomats are on their way to identify the victims. Sputnik has gathered the facts about the Russian mission in the CAR.

Moscow sent five military advisers and 170 civilian instructors, as well as a supply of light arms and ammunition to support the country's government, led by President Faustin-Archange Touadera, in late January. According to a statement issued by the Russian Foreign Ministry in March 2018, the Russian mission in the CAR was tasked with training government forces and helping to "provide a lasting solution to the armed conflict."

In May 2018, anonymous sources within rebel groups in the CAR, cited by AFP, claimed that they had been approached by "Russian figures" offering to mediate in their conflict with the central government. A similar offer was made to the government itself, but was rejected by Bangui, according to a government spokesman. The Russian Foreign Ministry hasn't commented on the reports.

According to another AFP report, the Russian mission in the CAR also participated in humanitarian efforts, dispatching a convoy consisting of about 20 trucks loaded with medical supplies to local hospitals. Moscow hasn't commented on the matter.

The Central African Republic, which has seen years of violent clashes between Christian and Muslim groups following the overthrow of its long-time president, Francois Bozize, is considered to be one of most unstable countries in the region. The UN imposed sanctions barring weapons exports to the country in 2013, but a lack its peacekeeping mission's success, MINUSCA, led it to provide an exception for Russia in December 2017.