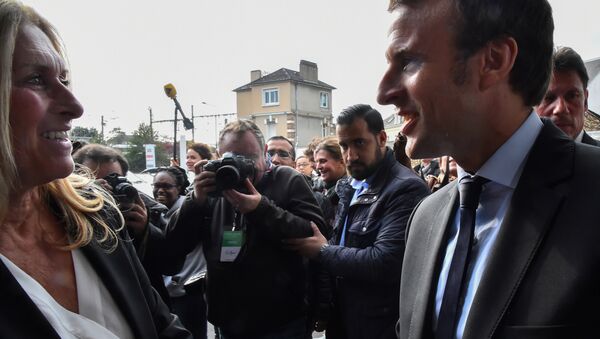 "Macron is not politically dead but is heavily wounded by Benalla scandal. He would be handicapped and watched after till the end of his term. His supporters and the ordinary French finally realized that he is not different from the old political elite, he is not a 'new era in politics,' he is just a human. He simply lost his political virginity over this scandal. We all remember how during his campaign he tried to portray himself as pure and sinless – a perfect human being," Mariani said.

The high-profile case broke out earlier in July after a video emerged capturing Benalla in riot police gear, tackling a young rioter to the ground and punching him repeatedly before fleeing. Two weeks ago, the prosecutor's office launched a preliminary investigation into the incident, while the Elysee Palace announced its decision to fire Benalla, with Macron saying he regarded Benalla's actions as a betrayal. Following the incident, the lower chamber parliamentary group of The Republicans party filed a motion of no confidence in the government.

From July 18 to July 27, Macron's approval rating went down from 41 percent to 37 percent, hitting a record low since August 2017. At the same time, a Change.org petition was launched to pressure French lawmakers to initiate impeachment proceedings against Macron due to a "breach of his duties clearly incompatible with the exercise of his mandate." Over 7,200 people have already signed the petition.

Mariani explained that legally the president of the French Republic could not be stripped of his immunity and impeached unless he is accused of high treason.

"First, legally he [Macron] has absolutely no risk to be impeached… The impeachment can be used in France but only in cases of high treason. Jacques Chirac had many problems with justice, he was convicted after his mandate of embezzlement and misusing of public funds. Sarkozy had the same issues with justice… Macron will also finish his mandate. President of the French Republic is the most protected and the most powerful in the Western democracies," the politician stressed.

READ MORE: Macron Ex-Aide Who Hit Protester: My Case Was an Attack on the President

Mariani further noted that Macron was aware of the incident from the beginning, highlighting that the investigation would have never taken place if the Benalla affair had not been covered in the media. The politician stressed that the biggest question that remained unanswered was why Benalla had enjoyed Elysee’s protection.

"He is not a minister, he is not important. He is just his private bodyguard. There are some rumors about this guy, he knows private details about the Macron family and he has keys for Macron’s house. What does this guy know that is the question we should ask," Mariani said.

The politician emphasized that all the calls for impeachment or no-confidence vote would soon be forgotten as the French National Assembly was going to the parliamentary recess in the first week of August.

The views and opinions expressed by Thierry Mariani are those of the speaker and do not necessarily reflect those of Sputnik.