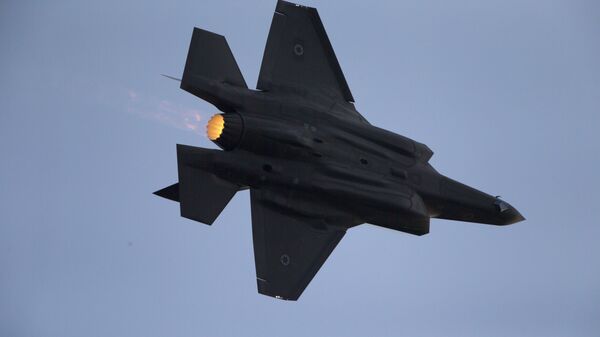 © AP Photo / Ariel Schalit
Subscribe
International
India
Africa
A photo of the fifth generation fighter jet was reportedly released along with other pictures of secret Israeli weaponry on an unspecified military forum. IDF officials have yet to confirm the incident.

An unnamed Israeli Defense Forces (IDF) officer has posted photographs of an armed F-35 jet in an underground bunker at the Nevatim base that could possibly reveal sensitive data on the cutting-edge fighter, Israeli Hadashot TV reported on July 31. The media outlet didn't specify when the picture was posted.

Hadashot also shared other cases of IDF soldiers publishing photos of classified military equipment. According to them, a tank base technician took pictures of a tank with secret equipment, while a navy serviceman photographed his command center. Both allegedly uploaded them to a military forum.

The media platform didn't reveal the name of the forum or the date of the infractions, but said the IDF officers didn't have permission to publish the photos and they were eventually deleted at the request of Israeli army officials. A tank officer, interviewed by the Israeli TV channel has equated the upload of such pictures with "acts of espionage," saying they could help Israel's enemies.

Israel acquired the F-35 fifth generation jets after the Joint Strike Fighter program ended. The program was led by the US and aimed at creating a cutting-edge fighter jet for itself and its allies. The initiative started back in 1992 and concluded in 2018, with the first jets already having been delivered to their buyers.

The US (as well as Israel) have been rigorously guarding the F-35's sensitive info, which led to a conflict between Washington and Ankara, who wants to buy both F-35 jets and Russian S-400 air defense systems. The US Congress is concerned that Russia may use S-400s bought by Turkey to the reveal F-35's weak spots and temporarily halted delivery of the jets until the Pentagon either confirms or disproves those concerns.