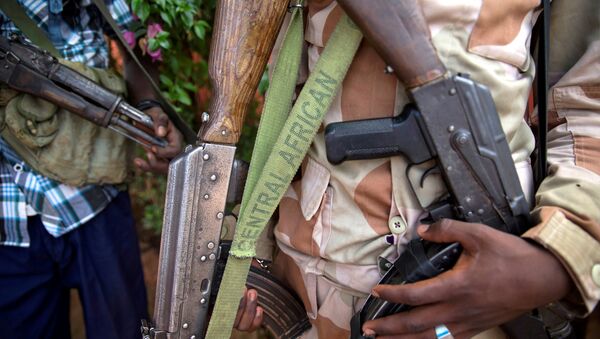 The Russian Foreign Ministry identified those killed in the Central African Republic earlier in the day, specifying that the documents found at the site show that they were Russian journalist Orkhan Dzhemal, cameraman Kirill Radchenko and producer Alexander Rastorguyev.

"According to information received from the Central African Republic on July 30, three people were killed near the city of Sibut (300 km north of the capital of the CAR, Bangui), carrying only journalistic documents issued under the names Kirill Radchenko, Alexander Rastorguev and Orhan Dzhemal," the Russian Foreign Ministry reported.

The Russian Investigative Committee stated that it had opened a criminal probe into the murder of the Russian journalists in the CAR.

Earlier in the day, AFP news agency reported citing sources close to the investigation, that the bodies of Russian citizens with press cards have been found on a road 23 kilometers (14 miles) from the central town of Sibut.

According to the AFP news agency's source, the Russians "were killed by unidentified armed men." The bodies have been transferred to the UN base in Sibut, as AFP reported, citing its sources.

UN Mission Confirms the Discovery of the Bodies

Later in the day, the UN Mission in the Central African Republic confirmed in a statement that three bodies had been found in a bullet-ridden car. The organization, however, yet to reveal the identity of those found.

"The MINUSCA was informed today of the discovery of three male bodies in a car some 23 kilometers north of Sibut, in the Kemo prefecture," mission spokesman Vladimir Monteiro told Sputnik.

Monteiro added that a patrol was sent to the area in search for the bodies.

"The patrol confirmed the presence of three bodies and a bullet-ridden car. The bodies were taken to the MINUSCA hospital in Sibut," the official said.

Reports About the Identity of the Killed Russian Nationals

Some Russian media have reported, citing sources, that those killed were renowned Russian journalists working on a documentary film in the country. According to the media, they were journalist Orhan Dzemal, director Aleksandr Rastorguyev and cinematographer Kirill Radchenko. Russian journalist Maxim Shevchenko told Sputnik that Dzhemal's former wife Irina Gordienko had confirmed the death of Orkhan.

"Unfortunately, his former wife Irina Gordienko confirmed to me that she had received photos of killed Orkhan," Shevchenko said.

According to the journalist, Dzhemal was going to the CAR to make a film about private military companies operating there.

What Russian Journalists Were Doing There?

According to Gorshkova, the last time the missing Russian journalists got in touch with the investigative center was the day before yesterday.

"We are trying to contact them, but their phones are switched off," Gorshkova added.

"As far as I know, they were not accredited as journalists," Konyahin said.

The Central African Republic is one of the poorest and most unstable countries in the world, with militia groups controlling most of its territory.

If confirmed, the incident would be the first murder of Russian citizens in the Central African Republic, where the Russian presence has been increasing over the last several months.

"According to preliminary information from local authorities, the bodies of three people, presumably Russians, have been found in the CAR. The Russian Embassy is in contact with the country’s law enforcement agencies to clarify issues of the victims' citizenship," Russian Foreign Ministry spokeswoman Maria Zakharova told Sputnik.

Ten 'Men of Arab Appearance' Attack German Boy in Yarmulke - Reports
She went on saying that Russian diplomats have traveled to identify those killed in the Central African Republic.

"Russian diplomats have departed to conduct the identification of the victims," Zakharova said.

Earlier in March, five Russian military servicemen, 170 civilian instructors, as well as a batch of small arms and ammunition were sent by Russia to the Central African Republic (CAR) at the request of President Faustin-Archange Touadera. This was done on a no-cost basis, the Russian Foreign Ministry reported.

READ MORE: Things to Know About the Russian Mission in the Central African Republic

For about three years, clashes between Christian and Muslim groups have been ongoing in the CAR.

At the same time, the situation was exacerbated following the overthrow of President François Bozizé and the arrival of the self-proclaimed head of state, Michel Djotodia.