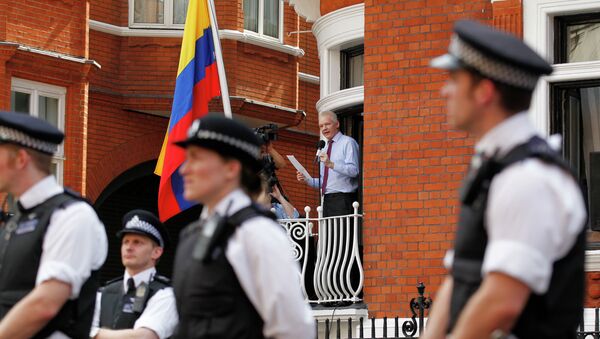 © AP Photo
Subscribe
Ecuador’s President Lenin Moreno has said to a Spanish news outlet that WikiLeaks founder Julian Assange should accept a penalty for breaching UK bail conditions. According to Moreno, Assange has been in this situation for more than five years and that a way out must be found.

Moreno added that "a way out that defends his rights, mainly his right to life, and that at the same time can give Ecuador the possibility of not having what undoubtedly represents a problem for our country."  Radio Sputnik has discussed Julian Assange’s options with Julian Burnside, a prominent Australian civil liberties attorney and member of Assange’s legal team.

Sputnik: President Moreno has called for Julian Assange to accept a penalty for breaching UK bail conditions. Are there any options for Mr. Assange?

Ecuador's President Says Wants to Find Solution to Assange Case Without Trouble
Julian Burnside: The main option for Assange is for the Australian government to step in and help him by doing a diplomatic deal with the British, which should not be difficult to do, which would enable him to leave the Ecuadorian Embassy and travel safely back to Australia.

There’s one little thing that I would correct in your introductory comment. He has not been charged with anything. He is not facing any charges of any sort anywhere, but what he fears is that if he walks out of the Ecuadorian Embassy, the British will arrest him, and they’ve threatened to arrest him, and charge him with breaching his bail conditions. They’ve also said, Jeremy Hunt, the new Foreign Secretary in Britain, has said that Assange faces serious charges. If he faces any charges, he’s not aware of them.

It suggests that the British Foreign Secretary knows that America wants to get its hands on Assange. And the real danger of that, of course, comes from the fact that US Attorney General Jeff Sessions said that Assange’s arrest was a priority and Mike Pompeo, the CIA Director, has said that it’s time to call out WikiLeaks for what it really is. He called it “a non-state hostile intelligence service often abetted by state actors like Russia.”

Assange's Defenders Alarmed at Ecuador's Wish to End His Stay in Embassy
That’s Mike Pompeo, whose voice I think needs to be listened to carefully and the difficulty with that is this – what WikiLeaks did was to re-publish or to publish the material that had been taken by Bradley Manning and it included, of course, the notorious collateral murder of innocent civilians being machine gunned to death from an American helicopter.

Now the difficulty with that is, that most people would never have seen that published by WikiLeaks, except that it was republished by the mainstream media across the world. No one is suggesting that Rupert Murdoch is going to be taken into custody or extradited to face charges in America. No one is suggesting that the people who run the mainstream press in Britain or in other countries should be extradited to America to face charges.

So the question is why is it that the Americans are so eager to get their hands on Assange and why is Australia so slow to come to the aid of an Australian citizen who’s clearly facing difficulty?

Sputnik: How serious are these charges if Mr. Assange does accept the condition? What consequences can it have for the WikiLeaks founder?

Ecuador 'Under Huge Pressure' by US Government Over Assange - Lawyer
Julian Burnside: The thing is that we don’t know what, if any charges he is facing. The reference to serious charges was made by Jeremy Hunt, the new Foreign Secretary in Britain, and that’s what’s very worrying because it does suggest that the Americans have been talking to the British; saying that they want to get Assange into America.

But, of course, if he’s taken to America then it’s pretty easy to see that they will treat him the way they treated Bradley Manning, who was held in dreadful conditions in jail for, I think, more than a year before he faced charges on which he was ultimately convicted and sentenced but later pardoned and had his sentence commuted by President Obama.

Sputnik: Some reports have stated that Julian Assange could be forced out of the embassy any time without a deal in place, is this likely?

Julian Burnside: I can’t assess whether it’s likely or not but what the new President of Ecuador has said is worrying and, of course, it raises the real threat that he’s going to be kicked out.

And if he’s kicked out, it will take about five minutes before the British police take him into custody to face charges for breaching his bail conditions six years ago, and after that heaven knows what deal the British have struck with the Americans.

The Crucifixion of Julian Assange: 'Never Send to Know For Whom The Bell Tolls'
I think the most fundamental point about this is pretty straightforward – anyone can say that Assange is in difficulty. I mean, his health is suffering after six years confined indoors in the Ecuadorian Embassy.

I saw him just a few weeks ago and he’s much weaker than he was when he went into the embassy. He needs help. He’s an Australian who needs help and the Australian government should be stepping in to help him. And they can do it, they should do it, but so far they’re not doing it.

Sputnik: What do you make of the Ecuadorian president’s statement that there’s a need for a solution which would guarantee Assange’s right to life and at the same time can give Ecuador the possibility of not having what undoubtedly represents a problem for the country?

Julian Burnside: It’s hard to know what problems he’s causing for Ecuador at the moment, but it is comments like that suggest a clear risk that he’s going to be kicked out of the embassy in which case he faces unknowable problems.

Sputnik: Suppose, Mr. Assange is forced out of the embassy, we hope this won’t happen but still, where would he go if he’s ejected?

Julian Burnside: I guess if he’s ejected from the embassy he will very soon find himself in an English jail awaiting charges for breach of his bail conditions. And whilst he’s waiting there I assume that the Americans will say “Okay, hand him over to us.”

The views and opinions expressed by Julian Burnside do not necessarily reflect those of Sputnik.

000000
Popular comments
infame for a Nation not to protect His citizen...
francescoslossel
31 July 2018, 01:11 GMT2
000000
so julian thinks that the other julian should get back to australia - the puppy of washington, where he will receive an impartial legal process. Now that is simply naive and he should know better than that.
michael
31 July 2018, 02:40 GMT2
000000
Newsfeed
0
New firstOld first
loader
LIVE
Заголовок открываемого материала
Access to the chat has been blocked for violating the rules . You will be able to participate again through:∞. If you do not agree with the blocking, please use the feedback form
The discussion is closed. You can participate in the discussion within 24 hours after the publication of the article.
To participate in the discussion
log in or register
loader
Chats
Заголовок открываемого материала
Worldwide
InternationalEnglishEnglishMundoEspañolSpanish
Europe
DeutschlandDeutschGermanFranceFrançaisFrenchΕλλάδαΕλληνικάGreekItaliaItalianoItalianČeská republikaČeštinaCzechPolskaPolskiPolishСрбиjаСрпскиSerbianLatvijaLatviešuLatvianLietuvaLietuviųLithuanianMoldovaMoldoveneascăMoldavianБеларусьБеларускiBelarusian
Transcaucasia
ԱրմենիաՀայերենArmenianАҧсныАҧсышәалаAbkhazХуссар ИрыстонИронауОssetianსაქართველოქართულიGeorgianAzərbaycanАzərbaycancaAzerbaijani
Middle East
Sputnik عربيArabicArabicTürkiyeTürkçeTurkishSputnik ایرانPersianPersianSputnik افغانستانDariDari
Central Asia
ҚазақстанҚазақ тіліKazakhКыргызстанКыргызчаKyrgyzOʻzbekistonЎзбекчаUzbekТоҷикистонТоҷикӣTajik
East & Southeast Asia
Việt NamTiếng ViệtVietnamese日本日本語Japanese中国中文Chinese
South America
BrasilPortuguêsPortuguese
NewsfeedBreaking
02:59 GMTRussia, China Slam Idea of Summit For Democracy As It Contradicts Development of Modern World
02:30 GMTBoebert vs. 'Jihad Squad': GOP Rep. Buries the Hatchet With Squad's Omar Over Feud Caused by Remarks
01:53 GMT'As if Disney Were Entering Notre-Dame': Critics Blast Cathedral's 'Woke' Rebuilding Plan - Report
01:42 GMTMan Killed After Trying to Crash Gate of San Diego Military Base With Knife
01:07 GMTNew York Governor Declares State of Emergency Amid Spike in COVID-19 Infections
YesterdayPfizer Unsure if Omicron Evades Its Vaccine, Can Launch New One in 100 Days
YesterdayMusk Rails Against State Aid as Tesla Pulls Application for $1.28 Bln in Subsidies for Berlin Plant
YesterdayBiden Says Not Concerned About US Stock Market Plunge as He 'Expected It'
YesterdayMalawi Defends Inviting Mike Tyson to Be Cannabis Ambassador - Report
YesterdayFDA Deems Merck Pill Effective Against COVID-19 as Experts Plan to Review Safety
YesterdayThose Darned Crickets! FBI Makes Mystery 'Havana Syndrome' its Top Priority
YesterdayVideos: Shooting Prompts Lockdown at North Carolina Mall
YesterdayTrump Claims He Never Planned to Start War With China, Says Milley Should Be Tried for 'Treason'
YesterdayTrade Unionists Slam Labour London Mayor Khan Over ‘Unnecessary Strike’ Tweet
YesterdayFour Dead After Unknown Gunmen Open Fire on Bus Carrying Students in Kosovo - Reports
YesterdayBiden Confirms New Travel Bans From South Africa, 7 Other Countries Effective November 29
YesterdayMerkel Reportedly Picks Song by 'Godmother of German Punk' for Her Chancellorship Farewell Ceremony
YesterdayIranian Government Websites' Reportedly Defaced With 'Death to Khameini' Caption
YesterdayHow Biden's Summit for Democracy Causes a Cold War-Style Two-Camp Polarisation of the World
YesterdayBlack Friday Protest at 'Pandemic Profiteer' Amazon UK Over 'Abuse of Workers'