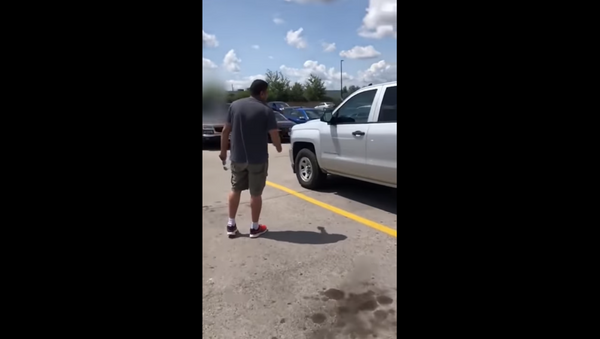 © Screenshot/Patryk L
Subscribe
Ontario police are investigating a man for a possible hate crime after he was recorded threatening to kill the children of a couple hailing from India outside of a local Walmart last week.

The confrontation, which took place at roughly 1 p.m. local time on Friday, started over a parking spot at the Walmart Stoney Creek Supercenter in Hamilton, Ontario. The footage was shared on social media by Walmart employee Patryck Laszczuk, who told the Toronto Star that he got the recording from the man of Indian descent in the video, who is one of his coworkers. The video, which captures the latter half of the confrontation, was recorded by his coworker's wife.

Ten seconds into the video, when Robertson notices the camera, he hits the gas and seems to ram his vehicle into the employee's wife. Rather than getting out of the car, the 47-year-old proceeds to yell at the woman.

"Oops," Robertson is heard saying, before telling the woman to "get out of the way" twice.

Laszczuk's coworker responds to the incident by briefly grabbing Robertson, who quickly starts yelling. "You put your f**king hands on me, I will break your legs. You're the one trying to harass me," Robertson says.

"You want me to go back to my country? I'm a Canadian citizen," the Walmart employee fires back. Robertson replies by mocking the employee's accent, saying, "You don't talk like a Canadian."

"I don't [believe you're Canadian]," Robertson adds as he's slowly driving away from the scene. "I'm racist as f**k. I don't like you. I don't like her. I would kill your children first."

Before pulling away, he yells out, "Don't ever attack me again."

Laszczuk told CBC News that he decided to share the footage online because he was "horrified" and wanted Robertson "brought to justice."

He added that the couple, who are originally from India, are Canadian citizens and have lived in the area for several years. The couple does not want to be identified at this time.

The wife of Laszczuk's co-worker was examined by medical personnel and "received only minor injuries," according to Hamilton police.

Officials arrested Robertson and charged him with dangerous driving, failing to remain at the scene of an accident and threatening death, the Star reported. He is expected to appear in court on August 23. The altercation is currently being reviewed by the department's Hate Crime Unit.