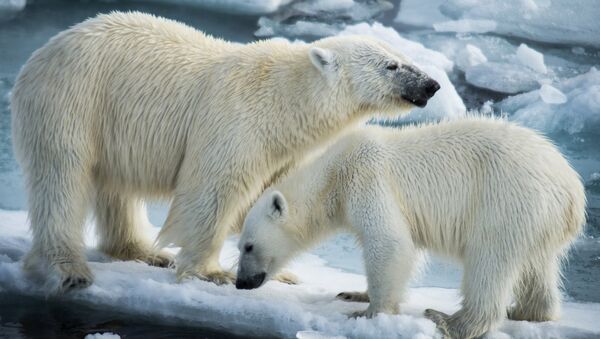 © Sputnik / Valeriy Melnikov
/
Go to the photo bank
Subscribe
A German cruise line has been criticized after one of its guards shot a polar bear dead when the animal attacked a 42-year-old employee of the company.

According to reports, the attack occurred Saturday when the MS Bremen cruise ship, operated by the German Hapag Lloyd Cruises company, landed at Spitsbergen, the biggest island of Norway's Svalbard archipelago. The Norwegian island chain stretches to the North Pole and is a popular tourist location because of its glacier-filled terrain, home to polar bears, reindeer and foxes. The Northern Lights, a natural light display in the Earth's sky, can also be seen from Svalbard during the winter.

According to a statement posted in German by Hapag Lloyd Cruises posted on Facebook Sunday, one of the company's guards was unexpectedly attacked by a polar bear while tourists were on shore Saturday, even though polar bear guards always scan the land to ensure there are no polar bears in the area before tourists can freely roam.

In this incident, one unidentified employee, who has been working as a guard for four years, was attacked by a polar bear and was unable to defend himself. Because the guard's life was in danger, the other guards intervened and shot the animal. The injured guard was flown by a rescue helicopter to a hospital and is in stable condition, the statement notes.

According to Spitsbergen police commissioner Ole Jakob Malmo, before the guards shot the polar bear, they first tried to scare it off by "shouting and making loud noises as well as firing a signal pistol," AFP reported Sunday.

The incident sparked outrage on Twitter, with many condemning the shooting of the animal. Polar bears are classified as vulnerable by the World Wildlife Fund (WWF), which means that they face a high risk of extinction in the wild. With sea ice melting because of global warming, their natural habitat is threatened. The current global population of polar bears is between 22,000 and 31,000, according to WWF.

"Let's get too close to a polar bear in its natural environment and then kill it if it gets too close. Morons," British actor, comedian and animal rights activist Ricky Gervais tweeted Sunday.

​In 2015, Czech tourist Jakub Moravec was dragged out of his tent and slightly injured by a polar bear while camping with six others north of Longyearbyen, a small coal-mining town on Spitsbergen Island. The bear was eventually killed by local authorities, according to reports.

000000
Popular comments
haha "A polar bear shot dead afte rit injured a cruise ship guard loading tourists on a ship in Svalbard archipelago. who was there first? the bears or the tourists?" That's a good question... but a more pertinent question would be, who had the GUN!