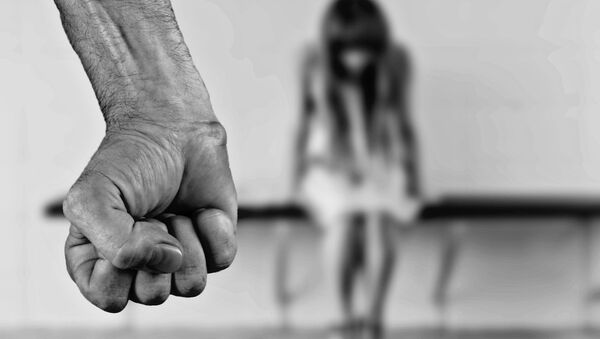 A 22-year-old French student gave an interview to a local TV network to tell her story of how she was harassed by a man outside a Paris café as the government has stepped up its anti-street harassment campaign, having decided to introduce on-the-spot fines in autumn.

Marie Laguerre has shared CCTV video of a man slapping her outside a café in the 19th district of Paris while she was returning home from work last week.

The man started making “dirty noises, comments” and whistling in her direction, and she responded to him, saying “Shut up”:

“It wasn’t the first time – that day, that week, or that month, it had been building up. I got angry and said ‘shut up’. I didn’t think he’d hear, but he did,” she said.

Marie further explained that the angered man stopped only to grab an ashtray from a café table and throw it at her. In response, Laguerre insulted him and he swiftly approached her.

“I felt hatred, I refused to be demeaned, it was humiliating. I refused to look down, I looked him right in the eyes, I wasn’t going to apologize,” she elaborated, adding that he slapped her across the face and went on yelling at her – the moment was captured on the café’s video.

As soon as he slapped Marie so badly that she lost balance and nearly bashed her head against the barrier of the café terrace, one of the visitors quickly picked up a chair and seemed to threaten to hit the assailant, whereas the victim left the place.

Well done to her for standing up to him! And kudos to the guy in the white shirt who immediately leapt to action and grabbed the chair 👏🏽👏🏽👏🏽👏🏽

The surveillance footage she posted on her Facebook page went viral in an instant, having been viewed over one million times, shared more than 5.6k times and received over 1.5k comments.

“To all those who say that the witnesses did not react well enough everything happened very quickly and they did not have time to understand the situation. The attacker was dangerous. After the attack, I came back and the witnesses were very supportive,” she wrote.

This type of street harassment is sadly all too common in Paris. Marie Laguerre is right: it cannot go unpunished. #MeToo https://t.co/XFAyyhroT7

After Marie filed a complaint with the police, Paris prosecutors opened an inquiry into sexual harassment and armed violence, although the assailant has yet to be tracked down.

Reacting to the incident, French Equalities Minister Marlene Schiappa, who has been campaigning to put an end to street harassment, told local media that she was “outraged,” and “unfortunately” not surprised.

“The political response must be strong and it is, because, for the first time in France, we will fine those responsible for street harassment,” she said.

This kind of conduct by men on the streets is very shameful. At there some men who came forward to protest. Fines are not enough throw these brutes into jail as well as fine them heavily. Incidents of harassment of women is increasing by the day. This needs to be stopped.

A bill, which is expected to be passed by the end of the week, would forbid “annoying, following, threatening a woman,” and offenders would start receiving fines this autumn.