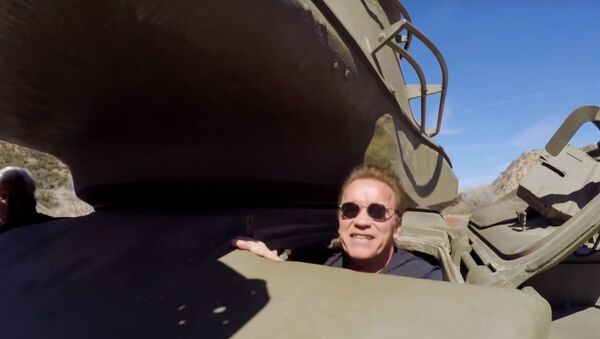 He’s back and ready to crush things: during an appearance on Jay Leno’s Garage Thursday, The Terminator star Arnold Schwarzenegger showed off the power of his 1951 M-48 Patton tank.

The actor-turned-politician told the TV host that his tank was exactly the same one he used while serving in the Austrian Army back in 1965, and he didn’t hesitate to funnel $20,000 to ship it to the United States in 1991 when Austria suggested giving him what he described as the “great toy” for free.

“That’s exactly the same tank with the 331 number on it. M-47. It’s exactly the tank. Let’s jump in there and anything we find – we crush,” he told Jay Leno, suggesting putting the vehicle’s Chrysler V12 twin turbo engine to the test.

By a twist of fate, the first thing the two stumbled upon was a black stretch limo – it didn’t take Schwarzenegger long to hit the gas and flatten out the car.

Beyond crushing cars with the tank – which he’s apparently very  fond of – the former governor of California allows kids to drive the 28-foott-long military vehicle with him as a reward for staying in school.

“I bring kids out here from the after-school programs. When they stay in school, their reward is to come out here and drive tanks with me,” he told Leno, who, in turn, jokingly asked, “And the ones who don’t stay in school – you crush them?”

This is not the first time that the Pumping Iron star used his personal tank to demolish a car. In 2014 he launched a fundraiser for after-school programs, encouraging people to crush things together: “Come to LA, and let’s crush things in my tank. Let’s crush a taxi cab, let’s crush a piano!”