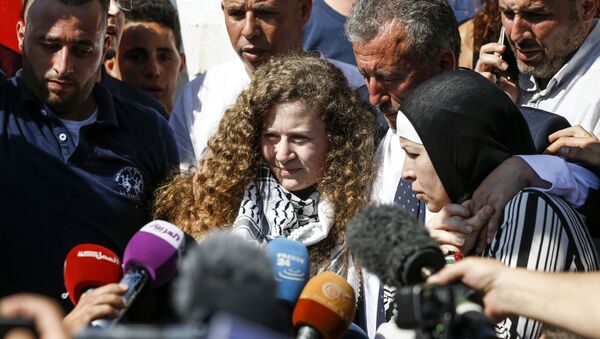 READ MORE: Palestinian Teen Given 8 Months in Jail for Slapping Israeli Soldier in Her Yard

The army has transferred the two women to their village of Nabi Saleh in the West Bank, where the 17-year-old is expected to speak at a press conference at 4 p.m. local time (13:00 GMT) on Sunday.

Amnesty Calls for Release of Teen Arrested for Slapping Israeli Soldiers
Tamimi, who is largely viewed as a symbol of Palestinian resistance, was detained in December 2017 after she was filmed slapping and kicking two Israeli soldiers outside of her house in Nabi Saleh.

The teen was reportedly angry because her 15-year-old cousin had been severely injured after being shot in the face with a rubber bullet as clashes between Palestinians and the IDF turned violent following US President Donald Trump’s decision to recognize Jerusalem as the capital of Israel.