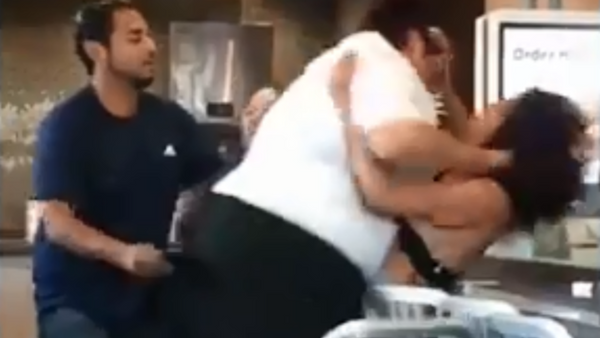 A McDonald’s employee who was involved in a heated fight with a milkshake-tossing customer earlier this week, said that her opponent had been “talking a lot of smack” before the vicious brawl.

In a Facebook video chat with the woman who filmed the viral clip, Erika Chavolla showed the cut on her hand she got from punching customer Sabrinah Fontelar “in the teeth,” but revealed that she wasn’t planning on hitting her.

“She was talking a lot of smack for a long time. I wasn’t even going to hit her. When there’s a big girl coming towards her, she started freaking out,” she said.

The McDonald’s worker, who has been allowed to keep her job at the fast food restaurant, further said that she was surprised to learn that the video of her beating Fontelar so badly that her breast popped out of her top went viral in an instant.

“That sh*t was crazy, it went everywhere. I’ve seen all the mean stuff they posting,” she said of the aftermath of their encounter.

While Chavolla claims that the brawl started after the smaller woman had thrown a milkshake at her, Fontelar – who is reported to be a stripper – said that the fight began when the staffer refused to take her money after she asked for a free water cup.

According to Marie Dayag, who recorded the video, the brutal beat down began after Erika shut down the soda machine to prevent Sabrinah from using a water cup to get a free soda.

Spokeswoman for Las Vegas Police Laura Meltzer told local media that Fontelar was issued a citation for misdemeanor battery and would appear in court at a later date.

Wild footage of the fight featured Erika repeatedly punching Sabrinah in the face and back of the head after the former hit her with a food tray. Fontelar was then thrown into a nearby booth, but seemed to refuse to surrender, and in a last-ditch effort picked up a chair to hit Chavolla, but was quickly disarmed.

The customer was repeatedly heard yelling “fight me” across the restaurant and threatening to “call the cops” if the employee punched her again. At some point, Chavolla can be heard shouting “my momma ain’t dead, you respect my momma!”

It remains unclear if police were actually deployed to the scene, but McDonald’s has launched an investigation into the incident.