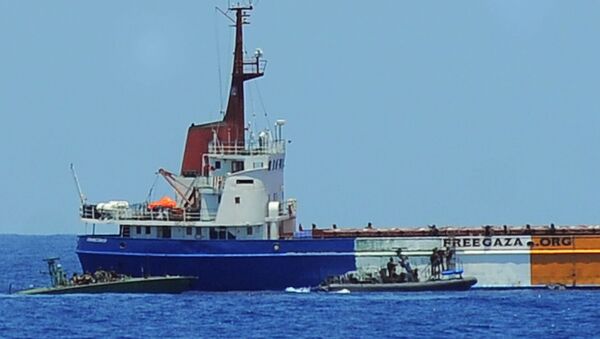 © Photo : Israel Defense Forces press-service
Subscribe
TEL AVIV (Sputnik) - Israeli military confirmed on Sunday that they had seized a ship with pro-Palestinian activists sailing from Europe to break the Gaza Strip blockade in the Mediterranean Sea.

Israeli Intel Analyst Fears Full-Scale War in Gaza May Be Just Around the Corner
According to the activist group, there are 22 persons on board the al-Awda, including the crew, human rights activists and journalists from 16 countries, as well as a medical supplies worth 13,000 euros ($15,200).

WATCH Blaze Engulf Italian Navy's Newest Ship
In most cases, interceptions were conducted without the use of force. An exception was the detention in 2010 of a caravan of six vessels that carried several hundred activists and thousands of tons of various cargoes to Gaza. In that incident nine members of the sail, Turkish nationals, who fiercely resisted the boarding group were killed.
Newsfeed
0
New firstOld first
loader
LIVE
Заголовок открываемого материала
Access to the chat has been blocked for violating the rules . You will be able to participate again through:∞. If you do not agree with the blocking, please use the feedback form
The discussion is closed. You can participate in the discussion within 24 hours after the publication of the article.
To participate in the discussion
log in or register
loader
Chats
Заголовок открываемого материала
Worldwide
InternationalEnglishEnglishMundoEspañolSpanish
Europe
DeutschlandDeutschGermanFranceFrançaisFrenchΕλλάδαΕλληνικάGreekItaliaItalianoItalianČeská republikaČeštinaCzechPolskaPolskiPolishСрбиjаСрпскиSerbianLatvijaLatviešuLatvianLietuvaLietuviųLithuanianMoldovaMoldoveneascăMoldavianБеларусьБеларускiBelarusian
Transcaucasia
ԱրմենիաՀայերենArmenianАҧсныАҧсышәалаAbkhazХуссар ИрыстонИронауОssetianსაქართველოქართულიGeorgianAzərbaycanАzərbaycancaAzerbaijani
Middle East
Sputnik عربيArabicArabicTürkiyeTürkçeTurkishSputnik ایرانPersianPersianSputnik افغانستانDariDari
Central Asia
ҚазақстанҚазақ тіліKazakhКыргызстанКыргызчаKyrgyzOʻzbekistonЎзбекчаUzbekТоҷикистонТоҷикӣTajik
East & Southeast Asia
Việt NamTiếng ViệtVietnamese日本日本語Japanese中国中文Chinese
South America
BrasilPortuguêsPortuguese