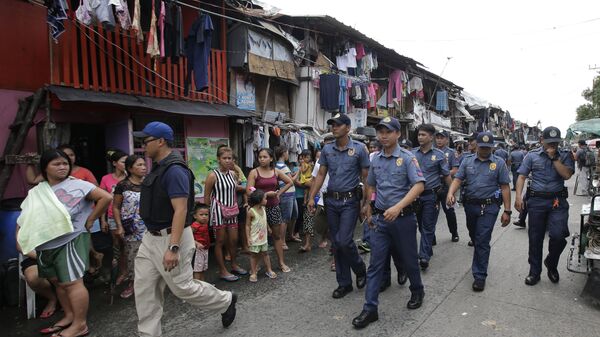 Philippine President Rodrigo Duterte has apologized to God for his earlier remarks during a meeting with Eddie Villanueva, the president and founder of the Jesus Is Lord Church.

Rodrigo Duterte, talking to a crowd on Thursday, said that the war on drugs that he initiated had made even God his enemy.

"I've made plenty of enemies, reaching as far as … Even God was included. Of course, I believe in God. What I said was your God is not my God," Duterte said, as quoted by manilastandard.net.

"My God… has common sense. Yours does not. There is a separation of Church and State. You should honor it by not invoking God. You may criticize me," he added.
Earlier, the president said that he truly believed in God.

READ MORE: 'He Can Go to Hell' — Duterte Rebuffs UN Official Who Criticized Him

"I cannot fight my faith because I was baptized Catholic, but I suspended it for the meantime. You know why? Because there's a separation of the Church and State," he said.

During a June 22 summit in Davao City, Duterte referred to God as "stupid" when recounting the biblical story of original sin. Some time later, Duterte offered his apologies to the Almighty.

The Philippines is considered to be the only Christian-dominated nation in Asia, with over 86 percent of the population — some 76 million people — avowing their belief in Roman Catholicism.

A large-scale anti-drug campaign was launched by Duterte in June 2016 as a follow up to his election promises to end drug-related crimes in the country.