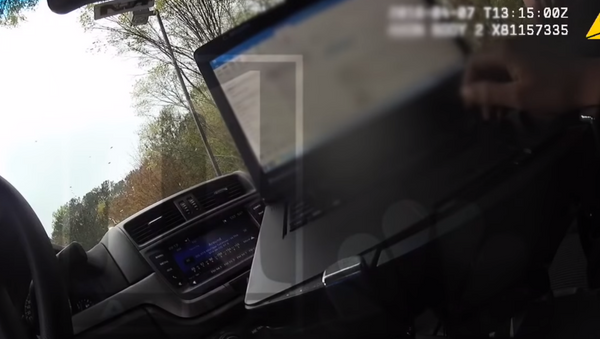 © Screenshot/11Alive
Subscribe
Two Georgia police officers were fired from the Roswell Police Department on Thursday after it was revealed that they'd use a coin flip phone app to determine whether or not to arrest a woman caught speeding.

Human resources policy violations, including failure to perform at an acceptable level and exhibiting conduct on or off duty that reflect unfavorably on the city and police department, were also listed.

The revelation that both officers had relied on the app wasn't made until investigative reporters with 11Alive obtained body camera footage recorded by Brown and Wilson during the early April arrest.

​The recording begins with Brown asking Sarah Webb, the driver, if she was aware of how fast she'd been driving. Brown later requested the vehicle be turned off and the keys be handed over.

"​You know how fast you were just going, ma'am?" Brown is heard asking Webb. "The ground is wet, it's been raining, and you're going over 80 miles an hour on this type of road. That's reckless driving ma'am."

After Webb apologizes and explains that she was speeding because she was running late to work, Brown responds by shutting down her explanation.

They Speed Among Us: Georgia Cop Pulls Over Alien Doing 84 (PHOTOS)

Brown walks back to her cruiser to discuss the situation with her partner, Wilson.

"Imma take her probably for reckless… she flew past me going probably 80, 85 on 92 in the wet road. She said was running later for work," Brown told Wilson. "I had to get up to 90 to catch her."

When Brown indicates that she "didn't have speed detection," Wilson informs her that she can just use the footage on her body camera to prove Webb had been speeding. Following a brief silence, a phone is pulled out.

"A head, R tail," Wilson says. "A" stands for arrest and "R" stands for release. Brown's response is a simple "OK."

Although the coin app ultimately lands on tails, Wilson quickly responds by saying "23," the code for an arrest, according to 11Alive. Webb was arrested and charged with going too fast for conditions and reckless driving.

Webb was not aware of the coin flip until 11Alive published their findings in mid-July. She told The New York Times that her "civil liberties were violated" and that the entire arrest "was a game to them [the officers]." Her charges were subsequently dropped.

Brown and Wilson were placed on administrative leave by the department prior to their termination. They have five days to submit an appeal.

000000
Popular comments
Police State
Western Glasnost
28 July 2018, 07:48 GMT
000000
Western Glasnost, Now you are insulting real police in other countries. The U.S. has tried to hide the increasing incidences of autism in their population (1 in 60 now) and the havoc it is wreaking on the work force. To accomplish this they have opened two positions to those suffering from autism spectrum disorder: Police and POTUS