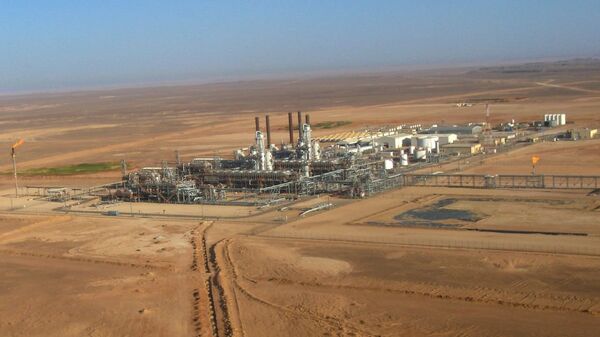 Chinese workers in Algeria, dissatisfied with their unpaid wages, have called on President Abdelaziz Bouteflika to help them. The protests by Chinese workers come against the backdrop of a tense political situation in the country.

The Chinese company GAEA has been engaged in business in Algeria since 2008. It has asked the Algerian development company Chaabane Belazzoug to pay up 240 million Algerian dinars (about $1.6 million), but the Algerian company has ignored the request.

In Oran, in the northwest of Algeria, next to a construction site, Chinese workers were seen waving Algerian flags, as they have not been paid for months.

The workers engaged in the construction of the facilities for the development company claim that they were forced out of their building camp and their personal belongings were destroyed. Some claimed that physical violence was even applied to keep them from protesting.

Their protests were heard by many Algerians who expressed their solidarity with the Chinese workers. On social media, Algerians were seen posting remarks about how the government needs to keep its promises to the Chinese company.

​Some said that the current situation is happening due to the instability of the political atmosphere in the country.

Chaabane Belazzoug has for several months ignored the complaints of the Chinese workers; they were forced to start a sit-in strike. Protesters were seen sitting with posters that in Arabic read: "Belazzoug, pay us our salary."

Moreover, the workers were chanting the name of the Algerian president demanding that he intervene in the settlement of this conflict.

According to the publication Ennaharonline, a special commission was created to help find a way out of this unpleasant situation. For its part, the Algerian Human Rights League has claimed that it is monitoring the progress of this case in order to have more information on this conflict.

“We are monitoring the situation in which the Algerian development company has not fulfilled the terms of the treaty by blocking the payment of several months wages to Chinese workers,” Vice President of the League Said Salhi told Sputnik in an interview.

Since President Bouteflika took office, the Chinese presence in Algeria has increased significantly. There are about 30,000 Chinese workers on the territory of the country currently.

These include merchants in the eastern suburb of the Algerian capital, Bab Ezzouar. There are workers who are employed by large companies that implement numerous projects for the construction of infrastructure facilities – roads, airports, government buildings and even mosques.

By 2019, the construction of the largest mosque in Africa, which is being conducted under the patronage of the Algerian president, will be completed. The architectural "miracle" is worth more than 1 billion euros.

The mosque is being built by China State Construction Engineering Corporation (CSCEC) and it has attracted over 10,000 Chinese workers to build it.