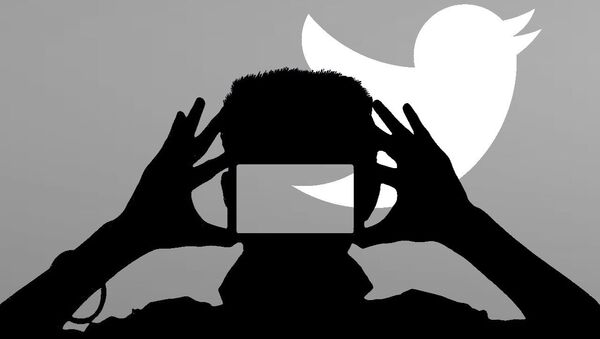 A Vice exclusive story on Wednesday caught Twitter red-handed engaging in the practice of shadow banning prominent GOP politicians, removing their profiles from drop-down searches. Since then, the social media platform has struggled to provide an adequate explanation for the phenomenon.

"We do not shadowban," a Twitter spokesperson told Sputnik Wednesday. However, Twitter employees were secretly filmed earlier this year explicitly bragging about doing just that.

Vice's expose, complete with screenshots forwarded to Twitter, showed prominent Republican Party politicians such as party chair Ronna McDaniel; Republican Congressmen Mark Meadows, Jim Jordan, Devin Nunes and Matt Gaetz; or Donald Trump Jr's spokesperson Andrew Surabian being absent from drop-down searches on the site's main interface. They could still be found through a "full search," although it's unclear if Vice meant a TweetDeck search or something else.

This is a bizarre and incredibly disingenuous statement from @Twitter. What's the point of following someone if Twitter blocks their tweets from appearing in your time-line? Maybe that's not technically "shadow-banning" but it's heavy-handed manipulation https://t.co/OaHf6qQplF pic.twitter.com/QzyJSajY5S

​The following day, Twitter Legal, Policy and Trust & Safety Lead Vijaya Gaffe and Product Lead (and co-founder) Kayvon Beykpour posted on Twitter's blog to try and clear up some of the confusion about what happened. However, their explanation left us with more questions than answers. They simply denied that any bias was behind the selective invisibility and palmed the blame off with vague language and insinuations and insulting leaps of logic.

Because of the baffling nature of their explanation, we will address its parts piecemeal.

Gaffe and Beykpour began by setting the terms of the discussion with an attempt at a definition of the phenomenon in question: shadow banning.

"People are asking us if we shadow ban. We do not. But let's start with, ‘what is shadow banning?' The best definition we found is this: deliberately making someone's content undiscoverable to everyone except the person who posted it, unbeknownst to the original poster."

This definition is worded in such a way that it isolates only the specific act of shadow banning and ignores the larger context and purpose behind the shadow banning, which is to decrease the visibility of unwanted behavior by a person in ways that are difficult to detect by the person in question.

This article from Wired in 2009 explains shadow banning as a variety of practices designed to decrease the prominence and visibility of trolls and problematic posters, one of which is, indeed, to render a user's content invisible to everyone except the user themselves; but also crowdsourced post ranking and allowing the filtering of posts by rank; the removal of vowels in offending language to neutralize it; and other tactics.

"The world's top discussion moderators have developed successful tools for keeping online miscreants from disrupting conversation. All are rooted in one psychological insight: If you simply ban trolls — kicking them off your board — you nurture their curdled sense of being an oppressed truth-speaker. Instead, the moderators rely on making the comments less prominent," the Wired article reads. A far cry from Twitter's selective definition.

"We do not shadow ban. You are always able to see the tweets from accounts you follow (although you may have to do more work to find them, like go directly to their profile)."

Let's take a moment to take this statement apart. When a user follows someone on Twitter, they do so explicitly for the purposes of seeing that person or organization's posts appear in their feed. That's literally the only reason. If that wasn't how the "follow" feature worked, we would all have to search for and visit the pages of each page we wanted to see the posts of each time we wanted to read them. But you can do that without following a person; you can search for anybody and see their posts so long as they aren't set to private and they haven't blocked you, in which case you couldn't see their posts even if you followed them.

So Twitter is here admitting to disabling the primary functional feature of its platform for select users, a feature designed to make users' content visible, and then swearing that this isn't shadow banning.

Imagine if we did this in the real world and unplugged someone's phone line to their house, then told people trying to call that person that their phone hadn't been unplugged and if you wanted to speak to the person you would have to "do more work to find them," like go directly to their house and speak with them. Wouldn't that defeat the purpose of the phone line? Wouldn't we call that censorship?

"And we certainly don't shadow ban based on political viewpoints or ideology."

This is simply a denial of the evidence. Vice and numerous other publications have provided concrete proof that whatever was happening was only affecting politicians of a certain political party and not politicians of another certain political party, along with a scattering of other figures, too. Denial isn't disproving, and it isn't an explanation.

The more I think about this new @Twitter explanation, the more obnoxious it becomes. I decide to follow someone to see their tweets in my time-line. Twitter (silently) decides for me it's best if I don't see them, unless I go to their page (making the following feature pointless)

​"We do rank tweets and search results. We do this because Twitter is most useful when it's immediately relevant. These ranking models take many signals into consideration to best organize tweets for timely relevance. We must also address bad-faith actors who intend to manipulate or detract from healthy conversation."

Again, what is a "healthy conversation?" What is "manipulation?" What is in bad faith? Some might find those questions begging or distracting, but there's a real question when it comes to interpretation of someone's facts or their presentation of those facts that leans heavily on the normative bias of the reader. What everyone considers to be useful, relevant or appropriate is not the same, and Twitter has never made clear exactly how they define those terms or judge particular posts or posters against those definitions.

The author of this Sputnik article is a transgender person. Some people might consider speech in the defense of their rights "hate speech" and some people might consider discussions of transgender issues not to be relevant. They might consider the presentation of alternative studies to those that say that gender is determined by genetics or by genitals as being manipulative or detracting from healthy conversation. Does that make them these things? Taking a stance on an issue like that necessarily requires making a political statement.

Further, the very act of discussion necessarily involves manipulation to some extent, does it not? One party seeks to convince the other party that it is right, by undermining its arguments and by casting doubt upon the facts and narratives presented by the other side. As before, the question of who decides which topics and which discussions are fair game and which are not is all-important: it requires making a political statement about what is and is not correct and what is and is not justified discussion.

So if a platform is pruning its content according to political standards, doesn't that make it a publication and not a neutral social forum?

And: Twitter — as it silently and with no transparency blocks me from seeing the tweets in my time-line of people I decide to follow — sanctimoniously denies it's "shadow-banning." Begging Silicon Valley execs to control political content on massive platforms is a huge mistake.

​Gadde and Beykpour went on to address certain specific aspects of Wednesday's snafu.

"‘It looks like this only affected Republican politicians. Were Democratic politicians also impacted?' Yes, some Democratic politicians were not properly showing up within search auto-suggestions as result of this issue. As mentioned above, the issue was broad-ranging and not limited to political accounts or specific geographies. And most accounts affected had nothing to do with politics at all."

Which Democratic politicians? Certainly not the equivalents of those GOP leaders affected. A city government official with a D next to their name being shadow banned is still an infraction of political discourse, to be sure (although again, we don't know which Democratic politicians were affected), but it's also not fair to say that a phenomenon that affected key leaders of a major political party, which controls two-thirds of the US government, but no major figures in the opposition party, is simply a glitch or programming error. There is clearly a problem of bias in how legitimate subjects of searches appear in the system, whether it was specifically designed or not.

So in other words, it was a problem that too many people liked certain politicians' content they post on Twitter, or "boosted" their presence. That sort of goes against Twitter's own stated goal of "serving healthy public conversation." Indeed, the statement that Twitter is "serving healthy public conversation" all while selectively trimming that conversation based on some parts of it being too-well-liked, all the while claiming impartiality, insults the reader's intelligence.

And isn't the excuse that it was simply a problem with the algorithm basically a version of the "banality of evil" defense? It shoves responsibility for effects caused by a system created by humans for a specific purpose away from the actors that created that system or helped it function and onto an abstract, faceless, nonliving entity: a bureaucracy or, in this case, a computer program.

Twitter hasn't disproven anything; all it's proven is how callously it performs its task of being an extended mouthpiece for The Resistance.