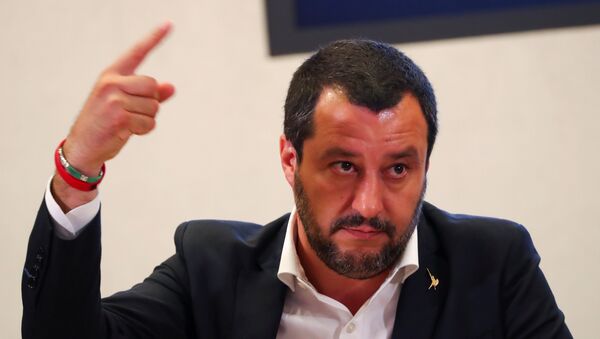 As Italy's populist government gave Brussels five weeks to devise a new asylum policy before barring all rescue boats from its ports, the country's Interior Minister was targeted by the local press for his attempts to tackle uncontrolled immigration into the country.

Italian Interior Minister and leader of the right-wing Lega Party Matteo Salvini has underscored that the country's leading Roman Catholic weekly Famiglia Cristiana had no reason to draw parallels between him and Satan over his hardline stance on migration.

"They are comparing me to Satan? I don't deserve that," he said, adding that he is comforted by the fact that he receives "daily support from many women and men of the Church."

His remarks came in response to the release of Famiglia Cristiana's new issue which features Salvini's photo on its cover with the caption "Go Back Salvini" in Italian, an apparent nod to the Medieval Catholic spell used to repel evil, "Vade Retro Satana" (Go back Satan).

"Nothing personal or ideological, it's just the gospel," the magazine noted, referring to Salvini's "rather personal idea of the catechism, and also of the Gospel."

"According to the Word of God, we will all be judged on loving our neighbor," Famiglia Cristiana added.

On Wednesday, Salvini, who is also Italy's Deputy Prime Minister, dismissed the EU's latest solution to the migration crisis as insulting.

"We aren't asking for charity handouts. Every asylum seeker costs the Italian taxpayer between 40,000 and 50,000 euros. "Brussels, they can keep their charity for themselves. We don't want money. We want dignity," Salvini said.

His rebuke came after the European Commission offered to shoulder the cost of accepting people rescued by boats in the Mediterranean from the common European budget, paying member states 6,000 euros for every migrant they take in and host at secure centers on their soil.

Tensions between Italy and other EU countries have escalated amid Salvini's uncompromising policy on migration, which includes proposals for much stricter migration control in the Mediterranean Sea.

The showdown gained momentum in mid-June when Salvini closed Italy's ports to the Aquarius rescue ship, which was carrying close to 630 migrants. The ship was eventually accepted by Spain instead.

Italy's Refusal to Accept Migrants 'a Way to Provoke Reaction From EU' - Analyst
Earlier, Salvini recalled that over the past four years, Italy has faced 650,000 arrivals by sea and 430,000 asylum requests, and  that the country hosts some 170,000 "alleged refugees" at an annual cost of 5 billion euros (about 5.8 billion dollars).

He also accused French President Emmanuel Macron of being "arrogant" for suggesting that Europe was facing a political crisis, not an immigration one. Salvini invited Macron to "stop insulting" Italy and to "instead show some concrete generosity by opening up France's many ports" to migrants.