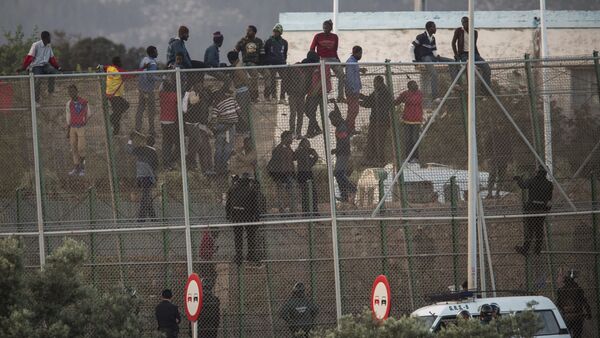 © AP Photo / Santi Palacios
Subscribe
About 800 migrants attempted to cross the border between Morocco and the Spanish enclave of Ceuta through a high fence; while 602 of them succeeded, 15 law enforcement officers were injured in the clashes, the Civil Guard of Spain reports.

Five of the injured law enforcement officers were taken to hospital.

Migrants made an attempt to cross a seven-meter high fence separating Morocco from Spain, at 6:35 a.m. They threw stones, sticks, Molotov cocktails, feces and hashish at law enforcement representatives and used sprays as flamethrowers. The migrants tried to cut the barbed wire on the fence with scissors and hammers.

Once they entered Spanish territory, they threw stones at cars of the Civil Guard.

Earlier, 592 migrants who managed to cross the border had applied with the International Organization for Migration; 132 of them were injured, and 11 migrants were taken to hospitals.

Since the beginning of the year, through the enclaves of Melilla and Ceuta, according to the International Organization for Migration, 3,125 migrants crossed the Spanish border, not including those who crossed the border on Thursday.