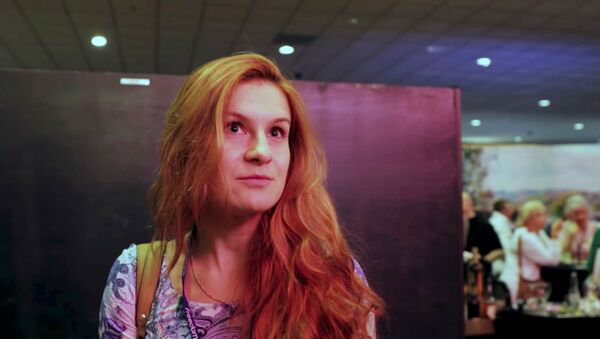 © REUTERS / FreedomFest/File photo
Subscribe
Legal defense for Russian national Maria Butina, who is accused of conspiring to act as an agent of a foreign government, will appeal her detention in the US within two weeks, according to her lawyer.

The US prosecutors intend to submit up to 12 terabytes of information on the case of Russian citizen Maria Butina but to seal most evidence, a prosecutor said at a hearing in the case in the US District Court for the District of Columbia on Wednesday.

At the same time, the prosecution requested from the court to restrict the access to the most evidence pertaining to the case.

"It will facilitate the protection of the investigation, not only in this case but in other cases as well," the prosecutor stressed, without specifying which other cases he was talking about.

US District Judge Tanya Chutcan said during the hearing that the protective order and evidence in the case should be provided by August 8.

The defense team for Russian citizen Maria Butina may appeal her detention in the United States within couple of weeks, Butina’s lawyer Robert Driscoll said at a court hearing.

Russian Diplomats in US to Visit Prison to Meet With Russian Citizen Butina
Driscoll said the defense may file a petition to withdraw all charges against Butina.

Butina, 29, is a student from Russia who has recently graduated from American University in Washington DC with a Master’s Degree in International Relations. On July 15, US authorities charged Butina for acting as an unregistered foreign agent in the United States. Judge Deborah Robinson declined to grant Butina lawyers’ request to release their client on bail and accepted the prosecutors’ arguments that Butina should remain detained because she poses a flight risk. She faces up to 15 years in jail.

000000
Popular comments
Who saw that one coming. How can we convict you if everyone knows our lies lol