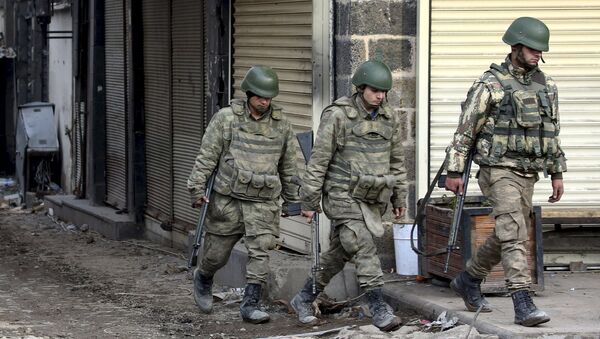 According to the Anadolu news agency, those members of the PKK, designated as a terrorist organization in Turkey, were neutralized on Monday in northern Iraq’s Kani Rash regions and in the Lice district of Diyarbakir.

Turkish Authorities Reportedly Detain 11 PKK Members in Ankara
Meanwhile, the armed wing of the Kurdistan Workers’ Party said that 15 Turkish servicemen were killed in a northern Iraqi district close to the border with Turkey, media reported on Tuesday citing the PKK statement.

"Our forces attacked Turkish army's positions in a mountainous area… in the Sidakan district, north of Erbil, and killed 15 Turkish servicemen," the statement said as quoted by Youm7 newspaper.

The Turkish authorities have been conducting security operations against the PKK across the country and beyond its borders since 2015, when the ceasefire between the government and the group broke down.

According to the Turkish Defense Ministry, more than 10,000 PKK fighters have been neutralized since the collapse of the truce. The conflict has resulted in over 900 deaths among Turkish military and police personnel, and about 500 fatalities among civilians.