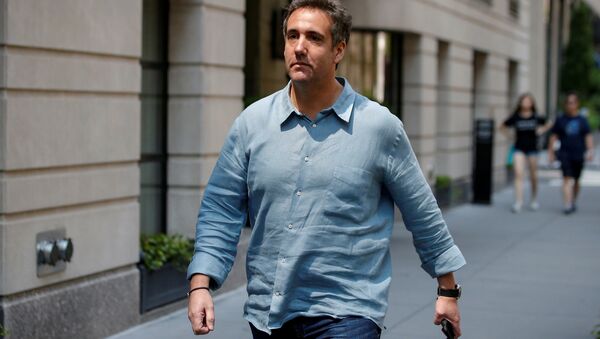 © REUTERS / Brendan McDermid
Subscribe
International
India
Africa
MOSCOW (Sputnik) - The CNN broadcaster released on Wednesday an alleged recording of then US presidential candidate Donald Trump’s conversation with his former attorney Michael Cohen, where the two seem to be discussing payments to buy the rights to a Playboy model’s story about her purported affair with Trump.

The discussion reportedly took place two months prior to the 2016 presidential election and concerned payments for the story of model Karen McDougal, who said she had an extramarital affair with Trump some 10 years ago. McDougal sold her story for $150,000 to the National Enquirer which refrained from publishing the story. McDougal has accused Cohen of making a secret deal with the head of the publication, who happens to be friends with Trump.

According to the recording, Cohen proposes setting up a company to finance the purchase of the rights from American Media, which publishes the National Enquirer.

Cohen Secretly Recorded Trump Discussing Payments to Playboy Model - Reports
When the issue emerges in the conversation again, Trump asked Cohen "What financing?" while Cohen said "We'll have to pay."

Then Trump allegedly offers to "pay with cash," yet the recording is muddled and it is uncertain whether he suggested paying with cash or not paying. Cohen replied "no, no."

Trump’s lawyer Rudy Giuliani has repeatedly said that Trump never made any payments on the issue.

The recording was provided to the broadcaster by Cohen's attorney Lanny Davis, who, in a comment to CNN, accused Trump’s legal team of "falsely disparaging" his client and said that "they fear" that Cohen would "someday speak the truth" about the president.

On April 9, the Federal Bureau of Investigation (FBI) raided Cohen’s office, home and hotel room, seizing various documents related to several issues, including payments allegedly made during Trump’s presidential campaign to adult film star Stormy Daniels, who claimed to have had an affair with Trump. The recording in question is also supposed to have been seized during the FBI raid.