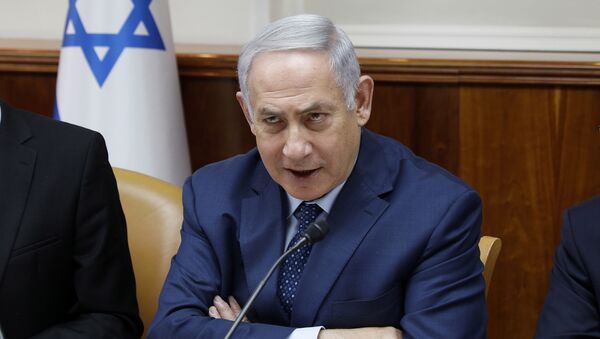 © AP Photo / Gali Tibbon/Pool
Subscribe
An Israeli cartoonist for the Jerusalem Post was fired Tuesday by the news agency over his cartoon portraying Israeli Prime Minister Benjamin Netanyahu and other Likud lawmakers as pigs from George Orwell’s “Animal Farm.”

Cartoonist Avi Katz, who worked for the Jerusalem Post for nearly three decades, recently drew a cartoon of Netanyahu and members of his Likud party taking a selfie after the Israeli Parliament passed a constitutional law last Thursday declaring Israel a "nation-state of the Jewish people" and stipulating that Jews have the right to self-determination in the country without mentioning other groups.

​"This is a defining moment in the history of Zionism and the state of Israel… Israel is a Jewish nation-state," Prime Minister Benjamin Netanyahu announced after the passage of the law, Sputnik reported at the time.

The cartoon, which was published Tuesday in the Jerusalem Report, a biweekly magazine published by the Jerusalem Post, was met with indignation by some and praise by others. It portrays Netanyahu and his party members with the heads of pigs and includes the quote, "All animals are equal, but some are more equal than others," a direct quote from Orwell's "Animal Farm." The book, about how animals on a farm revolt against their human owners, is an allegory that reflects the Russian Revolution of 1917 and the subsequent Stalinist era of the Soviet Union.

Following criticism of the cartoon by readers, the Jerusalem Post announced that it would no longer collaborate with Katz.

"Avi Katz is a cartoonist who worked as a freelancer at the Jerusalem Post, and in accordance with editorial considerations, it was decided not to continue the relationship with him," the Jerusalem Post said in a recent Hebrew-language statement, the Times of Israel reported Wednesday.

In a Wednesday statement to Sputnik, award-winning American cartoonist Ted Rall called the firing of Katz "despicable" but noted that "it's far from usual."

"He was doing his job: lampooning the rich, powerful, the oppressors. The Jerusalem Post made a disgusting concession to the forces of censorship and reaction by agreeing, as no doubt happened as the result of complaints from the far right and perhaps officials in the government, to let him go," Rall told Sputnik.

"Although it's tempting to say that this sort of controversy proves the power of cartooning, what good is a cartoon if it can't be distributed to a wide audience like that of the Jerusalem Post? Editors claim that they want good work in their newspapers. That's a lie. They want tame work. If they wanted good work, they would hire hard-hitting cartoonists. And they certainly wouldn't fire cartoonists who produce stuff that kicks politician butt," Rall added.

"From the firing of Rob Rogers by a Pittsburgh Post-Gazette that has moved right to support [US President] Donald Trump to my dismissal by the LA Times as a favor to the Los Angeles Police Department — a firing that they continue to defend despite the fact that they have been proven wrong and have been taken over by ‘new' leadership — cartoonists are becoming an endangered species," Rall continued.

Rogers, the former editorial cartoonist of the Pittsburgh Post-Gazette, was fired earlier this month for drawings critical of Trump.

In 2015, the LA Times said it would no longer publish Rall's work after he published a blog post criticizing a Los Angeles police officer for wrongfully ticketing him for jaywalking in 2001. At the time, the LA Times questioned the accuracy of Rall's post.

Following Katz's firing, Israel's Animix Festival, which organizes an annual festival showcasing animation, comics and caricature, set up a fundraiser for him, stating that "no one will silence art and satire in the State of Israel." So far, more than $10,610 has been raised by almost 400 people.

000000
Popular comments
Wow....Naziyahoo led ISISrael is looking more and more like the other famous fascist leader Adolf.....and his fascist state...Israel wakeup before its to late... Your future is ....
Tazo
26 July 2018, 00:28 GMT2
000000
Looks like Netanyahu slowly becomes NetanYahweh, and this transformation was most likely provoked by numerous corruption affairs pilling up around him. If he complete that transformation before he get sacked from the PM position and lose popular sympathy completely among Israelis - as the one with whom he shares new name, i am afraid he could curse next generations of Israelis into slavery under Egyptians (or even worst, under Syrians) as it happened already few milleniums earlier. Well, history tend to repeat itself...
oldman
26 July 2018, 00:36 GMT
000000
Newsfeed
0
New firstOld first
loader
LIVE
Заголовок открываемого материала
Access to the chat has been blocked for violating the rules . You will be able to participate again through:∞. If you do not agree with the blocking, please use the feedback form
The discussion is closed. You can participate in the discussion within 24 hours after the publication of the article.
To participate in the discussion
log in or register
loader
Chats
Заголовок открываемого материала
Worldwide
InternationalEnglishEnglishMundoEspañolSpanish
Europe
DeutschlandDeutschGermanFranceFrançaisFrenchΕλλάδαΕλληνικάGreekItaliaItalianoItalianČeská republikaČeštinaCzechPolskaPolskiPolishСрбиjаСрпскиSerbianLatvijaLatviešuLatvianLietuvaLietuviųLithuanianMoldovaMoldoveneascăMoldavianБеларусьБеларускiBelarusian
Transcaucasia
ԱրմենիաՀայերենArmenianАҧсныАҧсышәалаAbkhazХуссар ИрыстонИронауОssetianსაქართველოქართულიGeorgianAzərbaycanАzərbaycancaAzerbaijani
Middle East
Sputnik عربيArabicArabicTürkiyeTürkçeTurkishSputnik ایرانPersianPersianSputnik افغانستانDariDari
Central Asia
ҚазақстанҚазақ тіліKazakhКыргызстанКыргызчаKyrgyzOʻzbekistonЎзбекчаUzbekТоҷикистонТоҷикӣTajik
East & Southeast Asia
Việt NamTiếng ViệtVietnamese日本日本語Japanese中国中文Chinese
South America
BrasilPortuguêsPortuguese
NewsfeedBreaking
02:13 GMTQueen, Her Corgis Could Be Attacked By Wolves & Bears if Royal Estates Rewilded, Tory Peer Says
00:59 GMTSmollett Becomes Aggressive During Trial When Cornered by Texts With Alleged Attacker - Report
00:45 GMTOmarova Backs Out of Biden Comptroller Nomination After GOP Attacks Claiming She’s a Communist
00:38 GMTPope Francis Compares EU’s Offer to Remove ‘Christmas’ For Inclusiveness With Fascist Rule
00:09 GMTWatch: South Korea Unveils Model for Hypersonic Weapon Prototype Days After US Blasted China’s Tests
YesterdayPutin-Biden Call: Key Points Discussed by US, Russian Presidents During Video Meeting
YesterdayWall Street Rallies Second Day in Row as Omicron Fears Fade, Tech Stocks up 3%
YesterdayUS Certifies Black Hawk Helicopter Model for Civilian Use
YesterdayPentagon Confirms Presence of US Forces in Ukraine, Declines to Disclose Number
YesterdayAmericans, Russians Dislike Each Other's Leadership - Polls
YesterdayUS House Capitol Assault Panel Threatens to Hold Ex-Trump Chief-of-Staff in Contempt
YesterdayCome to Daddy: Court Rules Australian Man Has Right to Over $50Bln in Bitcoin Stash
YesterdayCarjackers Make Use of Apple's Tracking Gadget, Police Say
YesterdayNever-Trumpers Hire Beltway Lobby Firm in Bid to Limit Presidential Powers
YesterdayTexas AG Paxton Claims Slew of WH Lawsuits Aimed to 'Control' State & Turn it 'Blue'
YesterdayAlleged Epstein Victim Says Maxwell Groped Her at Palm Beach Mansion When She Was 14 – Report
YesterdayUS Sen. Menendez Preparing ‘Mother of All Sanctions’ on Russia in Case of Ukraine Invasion
YesterdayMajority Back Tory MP’s Call for Return of Death Penalty for Child-Killers
YesterdayJen Psaki Holds Press Briefing After Putin-Biden Call
YesterdayUS Senate Foreign Relations Committee Holds 'Update on US-Russia Policy' Hearing