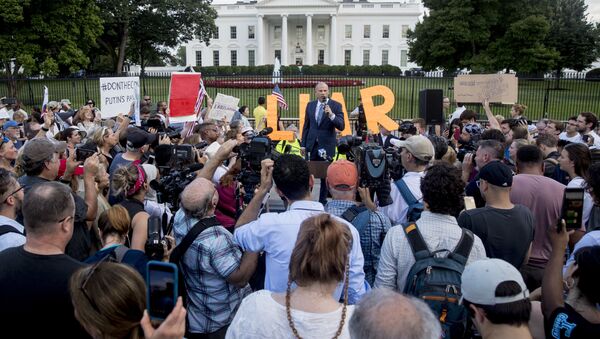 © AP Photo / Andrew Harnik
Subscribe
Protests will continue for a ninth consecutive night in front of the White House, with demonstrators expressing outrage over alleged treason committed by US President Donald Trump during his meeting with Russian President Vladimir Putin in Helsinki, Finland. But the protest’s messaging and organizer are raising some eyebrows.

The protests, which bill themselves as a continuation of the 2011 Occupy Wall Street movement, are organized by Adam Parkhomenko, a longtime political operative for Hillary Clinton and a quasi police officer in Washington, DC.

On Monday night, he announced on Twitter he had raised "over $100,000 towards Kremlin Annex protests," using the Russophobic "resistance" nickname for the White House. On Saturday, he tweeted that he had raised more than $30,000 "overnight" to continue protests outside the White House accusing Trump of treason.

Trump was greeted as he arrived at the residence across from Washington's Lafayette Park the night of July 16 by hordes of beltway demonstrators, who awaited his return to the White House with shouts of "traitor!" They told the president to "Go back to Russia" after his high-level talks in Finland, Sputnik News reported.

Since then, protesters have been out in full force in DC. Parkhomenko has "had fairly impressive turnout numbers given how many days he's been doing it. It's pretty hard to keep people interested for so long, especially in the rain," Ford Fischer, co-founder of the DC-based News2Share, an outlet which focuses on video reporting — primarily of protests — told Sputnik News Tuesday. Fischer has been to four of the demonstrations and plans on attending a fifth Tuesday night.

Parkhomenko, a Ukrainian-American born in the US, is somewhat of a wunderkind campaigner for former Secretary of State Hillary Clinton, on whose behalf he's been working for for 15 years. In 2004, at age 17, Parkhomenko set up VoteHillary.org and ran Draft Hillary for President 2004. He was then hired by HillPAC, Clinton's political action committee.

In 2008, Parkhomenko worked as an assistant to Clinton campaign manager Patty Solis Doyle, and after Clinton lost in the primary to Barack Obama, he started Vote Both, an expenditure committee to push Obama to draft Hillary Clinton as his vice presidential running mate. In 2013, he started the Ready for Hillary Super PAC, the ostensible aim of which was to persuade Clinton to run for president in 2016 (as if she needed persuading). In 2015, he left the PAC to become director of grassroots engagement for Clinton's official campaign.

Perhaps Parkhomenko's galvanizing of young people to call for the impeachment of the president is intended to make amends for his prior mistakes; failing to address their concerns, the party's disregard for Black Lives Matter activists, and the Clinton campaign's inability to stir voters in key swing states.

In a 2015 email to Clinton presidential campaign chair John Podesta leaked by WikiLeaks, a campaigner complains of "blow back" from millenials canvassing for Clinton who complained of her "exploiting" them without pay and using the power of the Black Lives Matter movement to get ahead while denying it importance. The email was sent to Parkhomenko, whose response was then forwarded to Podesta. "I know it is a thing for folks. Not much we can do unless the campaign makes a change across the board, which seems very unlikely," he wrote.

As DNC chairwoman Donna Brazile became worried about Clinton's prospects in key swing states a month ahead of the vote, she tore out a page from a notepad and wrote "Michigan, Florida, Pennsylvania, and North Carolina" on it, handing it to Parkhomenko to be taken as his top priorities, according to the book "Shattered: Inside Hillary Clinton's Doomed Campaign." She went on to lose in all of those states.

Parkhomenko also echoed fake news in a Medium.com post complaining that RT America "actively collaborated with WikiLeaks and received ‘new leaks of secret information,'" an allegation referring to the Podesta leaks that has been thoroughly debunked.

While Parkhomenko isn't politicking, he's policing. He has moonlighted as a reserve officer in the District, winning the Metropolitan Police Department's (MPD) "Reserve Officer of the Year" award in 2010. Parkhomenko assisted in more than 90 arrests and has been "instrumental in the recovering of several firearms and at least nine stolen vehicles," his superiors told the Washington Post in 2016. He is even issued a firearm.

Parkhomenko derives thrill "from the hunt" of "the bad guy," Rob Baechtel, another DC reserve officer, said, though Parkhomenko's side gig came as news to his boss at the Clinton campaign, Marlon Marshall, when the Post sought comment from him. Parkhomenko would work in the campaign's Brooklyn headquarters during the day and often times at night, drive to DC to patrol its streets.

Now, Parkhomenko is continuing his more-or-less successful streak with fundraising through the Party Majority PAC. Evidently, the irony of a police officer organizing an "occupy" protest (the previous of incarnations of which drew international outrage over the brutality police unleashed on the protesters) is lost on the demonstrators and Parkhomenko's supporters.

Parkhomenko has been doing the fundraising through the Democrat crowdfunding platform Act Blue. KremlinAnnex.org now directs to the fundraising page there.The page refers to the Helsinki meetings as the "treason Summit." 18 U.S. Code § 2381 — Treason dictates that the punishment for the crimes Parkhomenko is accusing the president of could include a death sentence. Parkhomenko's header image on Twitter levies the accusation, potentially unaware of the capital punishment it could require. He also told the Observer that the Helsinki summit "has treason all over it."

A GoFundMe page created by Women's March for All has also raised more than $9,500 "to provide material support (yes, we mean this in the warfare term) of food and water and security as might be required to sustain protesters at Lafayette Square."

Fischer says it looks like a lot of the money being raised by Party Majority PAC is going towards props and putting on political entertainment for the demonstrators: "You can see from my recordings that it seems like a lot of the activism is based on really large visuals and sounds. It's a whole lot about having really large speakers — and I don't mean the people speaking — I mean the amplification equipment. I was not there the night they had a mariachi band but I believe those weren't activists; they actually hired a mariachi band. They had on one of the nights, they had two rappers and a drummer who had at least some marginal level of popularity, so it seems like the kind of presentation of the whole thing is to have high-level visuals and stuff like that."

According to the fundraiser, the mariachi band included 18 people. On Sunday. Parkhomenko announced on Twitter that "Tuesday will be the first day Trump and the White House understands what protesters are saying as we have hired an individual who will be translating what the protesters are saying from English to Russian very loudly."

Big guests at the protests have included US Representative Joaquin Castro (D-TX); Rep. Steve Cohen (D-TN), who made a name for himself in November 2017 for introducing five articles of impeachment against Trump; actress Alyssa Milano; Michael Avenatti, the lawyer for the porn actress Stormy Daniels, who has accused Trump of having extramarital relations with her; and longtime Clinton confidant and president of the Center for American Progress Neera Tanden, who was pictured at the demonstration giving the ‘black power fist' in front of a sign with homophobic allegations against Trump and Putin which suggested their relations went beyond either diplomacy or treason.

Despite the protest organizer's background, Fischer says the demonstrators have been largely silent on Clinton, bringing her up "moreso when pro-Trump people are present."

If you ask the demonstrators, Trump is squarely in the pocket of big mother Russia. "The characterization of Putin is that he owns Trump. A really, really common thing is, they will chant in reference to I think it was Trump's second debate performance with Hillary, because Trump had said, ‘No, no, you're the puppet. You're the puppet,' right? So they chant: ‘Who's the puppet, you're the puppet,' referring to Donald."

Fischer highlighted the irony of the protest being one which promotes "national sovereignty."

"It's interesting because they're on the left but they're using, in a way, nationalist language, talking about national sovereignty in reference to the idea that Russia is controlling Trump; and that's been their attack against Russia, that it's meddling or that it's pulling the puppet strings of The Donald," Fischer told Sputnik News.

There's no end in sight for Parkhomenko's "Occupy" the White House protests. The fundraising page states: "We don't plan on stopping until Donald Trump is gone."

000000
Popular comments
Betrayal is in the eye of some beholders as also beauty is in the eye of the beholders. Opinions are OK and can be respected. Hate and discontent can be natural but the owners should have a leash.
Luis Chicago
25 July 2018, 03:45 GMT2
000000
maybe he is getting ready to run for president in ukraine?
michael
25 July 2018, 04:50 GMT2
000000
Newsfeed
0
New firstOld first
loader
LIVE
Заголовок открываемого материала
Access to the chat has been blocked for violating the rules . You will be able to participate again through:∞. If you do not agree with the blocking, please use the feedback form
The discussion is closed. You can participate in the discussion within 24 hours after the publication of the article.
To participate in the discussion
log in or register
loader
Chats
Заголовок открываемого материала
Worldwide
InternationalEnglishEnglishMundoEspañolSpanish
Europe
DeutschlandDeutschGermanFranceFrançaisFrenchΕλλάδαΕλληνικάGreekItaliaItalianoItalianČeská republikaČeštinaCzechPolskaPolskiPolishСрбиjаСрпскиSerbianLatvijaLatviešuLatvianLietuvaLietuviųLithuanianMoldovaMoldoveneascăMoldavianБеларусьБеларускiBelarusian
Transcaucasia
ԱրմենիաՀայերենArmenianАҧсныАҧсышәалаAbkhazХуссар ИрыстонИронауОssetianსაქართველოქართულიGeorgianAzərbaycanАzərbaycancaAzerbaijani
Middle East
Sputnik عربيArabicArabicTürkiyeTürkçeTurkishSputnik ایرانPersianPersianSputnik افغانستانDariDari
Central Asia
ҚазақстанҚазақ тіліKazakhКыргызстанКыргызчаKyrgyzOʻzbekistonЎзбекчаUzbekТоҷикистонТоҷикӣTajik
East & Southeast Asia
Việt NamTiếng ViệtVietnamese日本日本語Japanese中国中文Chinese
South America
BrasilPortuguêsPortuguese
NewsfeedBreaking
01:00 GMTWho has the Edge Between Manchester United and Liverpool?
00:12 GMTBritish Military Brings Over 100 People Who Had Left Afghanistan to UK - Defense Ministry
YesterdayUS Seeking Clarity Over Turkey’s Intention to Declare US Ambassador Persona Non Grata
YesterdayUS Authorities Getting Veterans Involved in Resettlement on Afghan Refugees - Reports
YesterdayBiden’s Popularity Drops More Than That of Any Other US Leader Since End of WWII - Poll
Yesterday‘Rust’ Director ‘Gutted’ by Fatal Shooting of Halyna Hutchins on Set
YesterdayPotty-Mouthed PM: Broadcaster Blocks Boris Johnson's Remarks on Gay Men, Muslim Women
YesterdayHome Run! The Astros Win a Ticket to the World Series Amid Sign-Stealing Scandal
YesterdayColombian Authorities Reportedly Capture Elusive Drug Lord Otoniel, Leader of Clan del Golfo
YesterdayTwitter CEO Jack Dorsey Issues Cryptic Warning of ‘Hyperinflation’ Soon To Happen in the US
YesterdayOne Person Killed, 7 Injured in Shooting Near University Campus in US
YesterdayIran Set to Cooperate With Islamic World in Nuclear Development - Spokeperson
YesterdaySupermarkets in UK Reportedly Use Cardboard Cut-Outs to Disguise Empty Shelves
Yesterday5.0 Magnitude Earthquake Shakes La Palma as Spanish Island Territory Reels From Volcano Eruption
YesterdayJeremy Clarkson Slams 'F***ing Government' at Farming Awards Ceremony - Video
YesterdayPakistan Denies Reports of Preparing to Sign Airspace Agreement With US
YesterdayWatch Massive Migrant Caravan Push North Into Mexico as US Reports Record Apprehensions
YesterdayWatch Iranian Governor Getting Slapped on Stage During His Inauguration
YesterdayAssange's Extradition Incomprehensible After Revelations CIA Plotted to Kill Him, Fiancée Says
YesterdayUnderwater Treasure May Point to Location of Long-Gone 'Island of Gold' Empire