'It's Scary': One Overdose Death Every Day In Vancouver But No Sign of Action Canada recently voted to legalise cannabis but the Mayor of Vancouver wants to go further and decriminalise personal possession of hard drugs like cocaine, meth and heroin. Sputnik spoke to Sasha Seymour, who moved to Vancouver from the UK last year, about the problem.

There were 365 overdose deaths in Vancouver last year — one a day.

Sasha Seymour, who moved to Canada from the UK last year, said she was horrified by the drugs problem when she first arrived in her downtown apartment.

"It is very noticeable and sadly it is the biggest problem facing Vancouver. In fact, along with homelessness, it is probably the only problem Vancouver has. But it is a big one," Miss Seymour told Sputnik.

She said East Hastings Street — a long thoroughfare, which runs east from the center of Vancouver — was "notoriously bad". 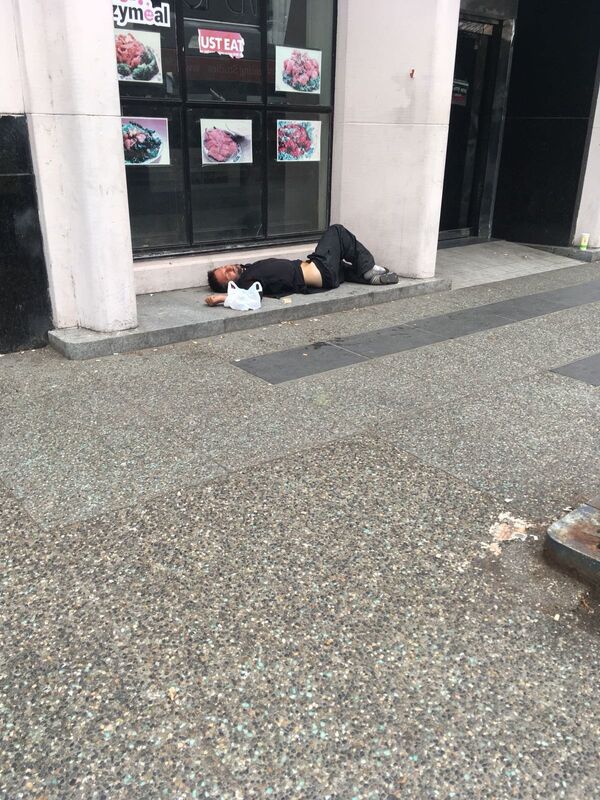 "The junction of East Hastings and Main is nicknamed Pain and Wastings because it is the next level of bad," Miss Seymour told Sputnik.

"There are two types of homeless people here. There are some who are minding their own business and just sat there, and then there are those who are drug addicted and they are the ones who put people on edge because they are in a world of their own and they walk up to you and sometimes shout at you and it can be quite scary," Miss Seymour told Sputnik.

But this is not a new problem.

The Eastside district in downtown Vancouver has been notorious for hard drugs and street prostitution for many years.

Between 1995 and 2002 serial killer Robert "Willie" Pickton killed 49 women and dumped their bodies on his pig farm 17 miles outside Vancouver. The majority of his victims were sex workers from the Eastside, who were not missed when they suddenly vanished.

His trial in 2007 highlighted the problem of drugs, homelessness and illicit sex on the Eastside but successive politicians in British Columbia have failed to address the problem.

"We are witnessing a horrific and preventable loss of life as a poisoned drug supply continues to kill our neighbours, friends, and family. Volunteers and first responders are working around the clock to keep people alive, but lives are on the line and more action is urgently needed," said Gregor Robertson, who was elected Mayor of Vancouver in 2008 and re-elected in 2014.

Despite being in power for a decade, Robertson — who announced recently he would not seek another term later this year — waited until March this year to come up with radical suggestions for solving the problem.

One of these, buried at the bottom of a press release, was to "convene a multi-sectoral task force to implement immediate decriminalization of personal possession of illicit drugs."

The federal government, headed by Justin Trudeau and his Liberal Party, has not responded to Robertson's suggestion.

As chiefs from across the country arrive in Vancouver to elect an AFN national chief Robert Williams, 29, drums Monday morning for those struggling in Downtown Eastside. pic.twitter.com/Lr1MzgsWyW

Many of those on the streets of Vancouver's Eastside are from the First Nations community and the majority have moved to the city from other parts of British Columbia and from neighboring Alberta and even further afield.

"I have no idea why they all go to East Hastings but they all sit along this one road. Hundreds and hundreds of them, gather there, and they don't get asked to move along and they are generally left there. There is a rumor that in the '80s or '90s a mental health facility was refused funding so they all had to kick out people with mental health problems and they got into drugs and then there was a domino effect. But that was in the '90s and it seems to have got worse," Miss Seymour told Sputnik.

Downtown Eastside in #Vancouver piques ever reporter's curiosity. But our attempt to extract stories from this neighborhood can veer us into exploitative reporting, sometimes overt and at times by accident.

She said a lot of the homeless people on the streets of the Eastside were quite old.

"The cost of living is very, very high here. You can be charged 1,800 (Canadian) dollars (US$1,368) here for a one-room apartment. It's ridiculous. So if you're homeless it might be quite hard to stop being homeless, even if you have a job or any sort of prospects," Miss Seymour told Sputnik.

How should journalists report on people who are marginalized?

Two journalism students from UBC unpack what could happen when reporters parachute into a vulnerable community like Vancouver’s Downtown Eastside. #cdnmedia #vanpolihttps://t.co/HS1EBPQmW8

She said she was shocked by how nonchalantly homeless people were treated by locals in Vancouver, especially by those who were clearly very wealthy.

"There is such a divide here. There are homeless people and then there are people with so much money. There are so many new skyscrapers with rich Asians or well-to-do young professionals and there are so many supercars — Teslas, Maseratis, Ferraris. There is a divide between people literally living on the street and people that have a lot of money," Miss Seymour told Sputnik.

Miss Seymour said she had seen heroin needles on the street in the area, which made her wary of wearing open-toed shoes.

She said people in Vancouver were extremely relaxed about cannabis, which will be formally legalized in Canada in October.

"It's ironic because there are so many people here are drug addicts. But if all these homeless people were on weed it would be way more manageable. When they are on heroin you can see they are on another planet," Miss Seymour told Sputnik.

In October a new Mayor of Vancouver will be elected but as yet there is no sign that tackling the opioid crisis on East Hastings Street is top of any politician's agenda, although Ian Campbell — a Squamish First Nations leader who has been chosen as the Vision Vancouver candidate, has pledged to tackle homelessness.

Another candidate, Wai Young, ironically worked for community agencies in Downtown Eastside for many years.