US Lawmakers Demand Hearing Into Putin's Alleged 'Manipulation' of Trump 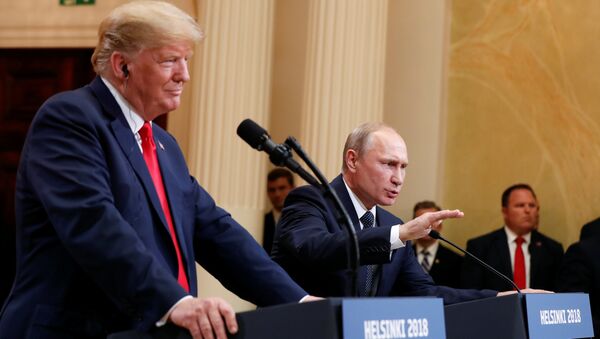 "We are writing to request that you convene an immediate hearing on the Trump-Putin summit that took place in Helsinki last week and the extent to which President Donald Trump is currently being manipulated by President Vladimir Putin," the lawmakers said in a letter to Committee Chairman Trey Gowdy.

Most US Citizens Support Idea of Another Trump-Putin Summit, Poll Reveals
The letter also said that the committee must hold a hearing with DNI Coats and any other witnesses who can discuss the threat posed by Russia to the US because the possibility that Putin is manipulating Trump is a matter of national security which deserves urgent attention.

In a Twitter message on Monday, Trump said he gave up "NOTHING" to Putin and merely "talked about future benefits for both countries." The US President addressed a series of disapproving comments, made by the US lawmakers and officials, after he had held the Russian leader in Helsinki.

Accoring to the critics, Trump undermined the US intellegence by casting doubt on allegations that Russia interfered in the 2016 presidential election. Later the US President tried to revoke his statement, saying he holds Putin responsible for the alleged "meddling".

Russia has repeatedly denied the allegations of meddling, calling them absurd and adding that the US never presented any evidence in order to suppost those claims. During the Helsinki summit with Trump, Putin stated the Moscow "never interfered and is not going to interfere into internal American affairs including election process."