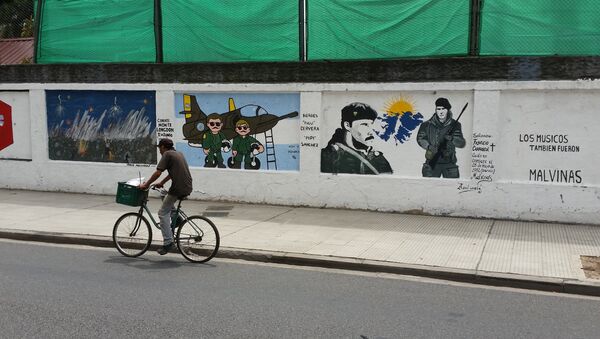 The UK National Archives have released documents from 1984 which give a fascinating glimpse into the discussions behind closed doors about the Falkland Islands. Sputnik takes a look at the files and explains their significance.

Two years after a British military taskforce defeated the occupying army of Argentina, the two governments met to discuss the long-term future of the South Atlantic archipelago.

But talks in the Swiss capital, Berne, between Margaret Thatcher's government and that of the new President, Raul Alfonsin — who had been elected in 1983 after democracy was restored in Argentina after almost a decade of military rule — collapsed in July 1984.

In October 1984 the Governor of the Falkland Islands, Sir Rex Hunt, visited London and met with Mrs. Thatcher.

The files, which have been released by the National Archives, reveal what was going on behind the scenes.

#OTD in 1982, HMS Hermes returned to Portsmouth, having taken part in what the US Navy described as "a military impossibility": the successful retaking of the Falkland Islands. pic.twitter.com/T7tQHCYhT0

"The Argentines have put forward a tough resolution apparently in order to withdraw it later and substitute a softer text. They hope thereby to encourage some who had previously supported us or abstained (especially our EC partners) to change their votes (at the UN). We are lobbying hard, pointing out the Argentines' true intentions, as set out in President Alfonsin's speech and press conference in New York…they amount to continued insistence on negotiations with a pre-determined outcome, ie the transfer of sovereignty to Argentina," said Mr. Ricketts, who later became Lord Ricketts.

"Sir Rex has told us that the firm position we took in the Berne talks had greatly reassured the Falkland Islanders," wrote Mr. Ricketts.

Put on your hiking boots and explore our gorgeous islands in the South Atlantic. So much waiting to be discovered #Falklands #hiking #hikingadventures https://t.co/y9mHXOp5J9 pic.twitter.com/VCfjhb00N0

​But he went on to say there was some concern in the islands for separate constitutions for the islands and for the nearby overseas territory of South Georgia and the South Sandwich Islands.

Up until 1984 the two territories had been administered together.

"Sir Rex considers that the Falkland Islanders, and perhaps the Argentines also, will misinterpret a separate constitution for the Dependencies as a signal that, ultimately a British government might be prepared to surrender sovereignty over the Falkland Islands, retaining the Dependencies as stepping stones to the Antarctic," writes Mr. Ricketts.

"We do not believe that this should be a serious problem: there is a wealth of evidence for our firm commitment to the Falkland Islands," he adds.

The separate constitutions were duly introduced in 1985, although the Falklands' was updated in 2009, the same year former President Alfonsin died.

Hundreds of British and Argentine soldiers were killed during the war waged by the UK in 1982 to reclaim the islands from troops deployed by then-Argentine leader General Leopoldo Galtieri.

The conflict lasted 74 days and ended with the Argentine surrender on June 14, 1982, returning the islands to British control.

Today the islands have a population of 3,200 — almost double the number who lived there in 1982.