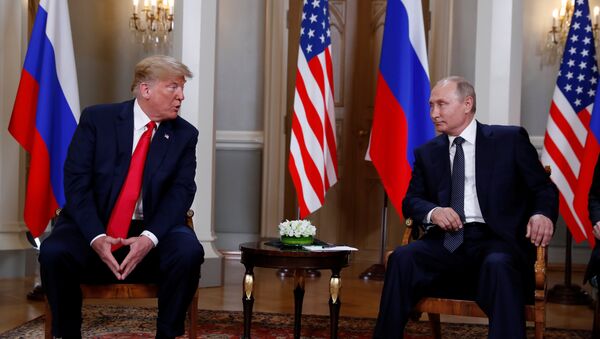 MOSCOW (Sputnik) – US National Security Adviser John Bolton after the Helsinki summit delivered an offer to hold the next meeting between US President Donald Trump and Russian President Vladimir Putin in Washington at the end of 2018, Russian presidential aide Yury Ushakov said Tuesday.

"In Helsinki, the organization of future contacts was not discussed. But a few days later, the US side came up with a proposal to hold the next summit in Washington at the end of this year. This proposal was delivered by US National Security Adviser Bolton. Then, as you know, Trump has repeatedly referred to this proposal in his public appearances and on Twitter," Ushakov told reporters.

READ MORE: Trump Says He 'Gave Up Nothing' at Talks With Putin

On Thursday, White House spokeswoman Sarah Huckabee Sanders said that Trump had asked Bolton to invite Putin to visit the United States in the autumn, adding that the consultations on the meeting had already started.

Most US Citizens Support Idea of Another Trump-Putin Summit, Poll Reveals
Trump and Putin met for the first official summit in Helsinki, Finland on July 16. The two presidents had a one-on-one private conversation followed by an expanded meeting. The two leaders discussed the Syrian refugee crisis, the situation in Ukraine, nuclear proliferation and Russia's alleged meddling in the 2016 US presidential election.