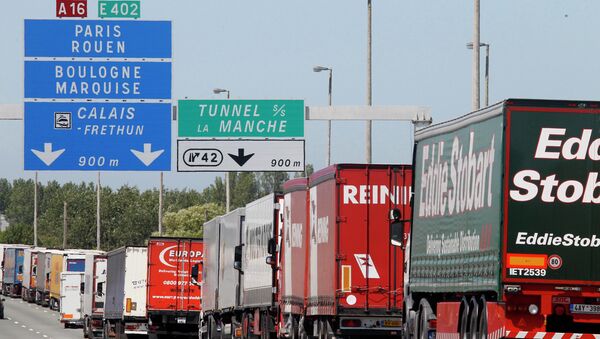 © AP Photo / Michel Spingler
Subscribe
The drastic measure aims to prevent a loss of perishable goods, but could backfire in dramatic fashion.

The UK government is considering suspending food safety controls in the event of a no-deal Brexit scenario, according to a report by Food Research Collaboration, a research group specializing in food policy, referencing an unnamed government adviser.

"In recent months, we have learned from a senior government adviser that plans are being prepared to ‘suspend food controls' if there are any delays to imports of perishable foods at our borders," the report reads. "We learned too that other policy commentators had been told the same by senior [Department for Environment, Food and Rural Affairs (Defra)] personnel. One government adviser even informed us that the plans were being devised ‘to avoid parliamentary scrutiny'."

Should the UK Cabinet fail to come up with a Brexit deal — an event which appears likely — the UK, fresh out of the EU, might lift its food safety controls to avoid delays in perishable goods on the border, the report says.

"If the UK were to suspend food safety controls, others might block exports from a country taking such a cavalier approach to public health. It would go completely against all the protestations of commitment to high consumer and health standards. Yet this appears to be what Defra envisages," the report continues.

"Senior industry people have told us in no uncertain terms that this would be folly and must be avoided, not least because it would threaten exports from the UK to the EU," the researchers write in the report.

The researchers say, however, that there have been "several hints" that ministers are inclined to endorse such a proposal.

'Very Mythical': Netizens Ridicule Brexit White Paper Translation Fiasco
In case of a no-deal Brexit scenario, when the UK becomes a separate trade entity from the EU, borders would emerge, complete with customs checks. Such checks would impact logistics greatly, the report says.

Even if a check of every single truck takes only four minutes, this would create a massive 20 to 29-mile truck trail at the customs checkpoint. Of course, simply waving them through might seem like a logical solution, but this also carries additional troubles.

"This is not ‘taking back control', it is abandoning it," says Tim Lang of City University and co-author of the report.

"One could argue that this is sensible emergency planning but it is also risky," he added, according to The Irish Times.

"Consumers would rightly wonder who was guaranteeing the safety and quality of the imported food they were buying. Criminals would be alerted to opportunities for food fraud. And the move would send negative signals to the EU at a delicate time in Brexit negotiations," he concluded.

However, Defra has denied allegations that food safety controls might be suspended.

"The government will not suspend food safety controls or weaken our high standards, even in the event of no deal," the agency said, according to The Guardian.