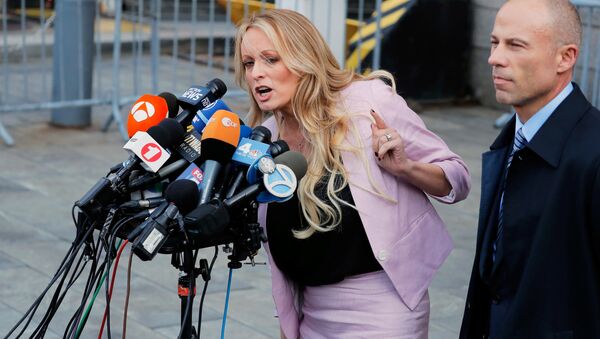 Stormy Daniels’ husband, Glendon Crain, has filed for divorce from the adult film actress. The announcement of the split comes about a week after she was booked at the Franklin County Jail by local police for touching a patron while performing at the Sirens Gentlemen's Club in Columbus, Ohio.

​The details of the filing have not been made public, but Crain is allegedly asking for a restraining order against his wife. A hearing for the restraining order is scheduled for July 27, the Washington Examiner reported, though that information has not been confirmed by Daniels' lawyer.

Daniels, whose real name is Stephanie Clifford, married Crain in 2010, and the two had a child in 2011. Crain is also an adult film actor who performs in pornographic films as Brendon Miller.

Last week, Daniels was charged with three counts of illegal sexually orientated activity at a strip club after officials said that she'd committed sexual acts with three undercover Columbus vice police officers, Sputnik reported at the time. Hours later, however, the charges were dropped after it was noted that the Ohio law Daniels allegedly violated referred to employees who "regularly appear" in the nude or semi-nude in the state. Daniels is not a regular performer at the club.

Daniels made headlines earlier this year after news broke that she'd had a sexual encounter with Donald Trump in 2006 and was given a $130,000 payment to keep quiet on the matter prior to Trump's 2016 presidential campaign. Daniels is currently in the middle of a legal dispute to void the hush agreement she signed.