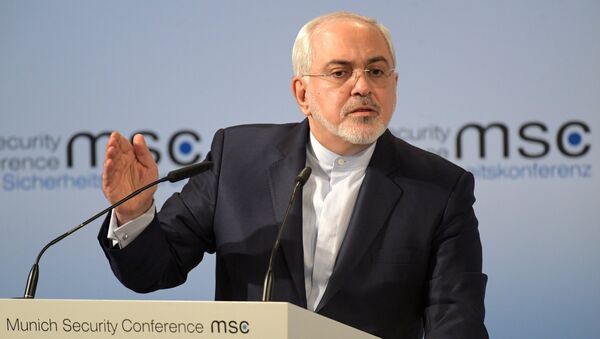 "COLOR US UNIMPRESSED: The world heard even harsher bluster a few months ago," Zarif wrote in a tweet. "And Iranians have heard them — albeit more civilized ones — for 40 yrs."

"We've been around for millennia & seen fall of empires, [including] our own, which lasted more than the life of some countries. BE CAUTIOUS!" he added.

​Zarif's comments come just one day after Trump warned Iranian President Hassan Rouhani that the country would suffer "consequences" if it continued to threaten the US.

"To Iranian President Rouhani: NEVER, EVER THREATEN THE UNITED STATES AGAIN OR YOU WILL SUFFER CONSEQUENCES THE LIKES OF WHICH FEW THROUGHOUT HISTORY HAVE EVER SUFFERED BEFORE," Trump wrote. "WE ARE NO LONGER A COUNTRY THAT WILL STAND FOR YOUR DEMENTED WORDS OF VIOLENCE & DEATH. BE CAUTIOUS!"

​Trump was responding to remarks Rouhani made to a group of Iranian diplomats that suggested POTUS should not "play with the lion's tail [as] this would only lead to regret."

"America should know that peace with Iran is the mother of all peace, and war with Iran is the mother of all wars," Rouhani said, Reuters reported, citing state news agency IRNA. And apparently firing back at reports that the US was actively trying to destabilise Iran's leadership, he said, "You are not in a position to incite the Iranian nation against Iran's security and interests."

Zarif is not the only state official to have chimed in on the Twitter feud. During a Sunday speech at the Ronald Reagan Presidential Library and Center for Public Affairs, US Secretary of State Mike Pompeo compared the Iranian government to the mafia.

"The ayatollahs are in on the act, too. Judging by their vast wealth they seem more concerned with riches than religion," Pompeo said. "These hypocritical holy men have devised all kinds of crooked schemes to become some of the wealthiest men on Earth, while their people suffer."

"The level of corruption and wealth among regime leaders shows that Iran is run by something that resembles the mafia more than a government," he added. Anti-war activist Ann Wright told Sputnik Radio's Loud & Clear on Monday that the Twitter feud is a diversion by Trump, who wants to drive attention away from all things linked to the Russiagate probe.

​"Trump needs a diversion, as always, from all of the stuff that's going around about the investigation on contacts with Russians before the election," Wright told Sputnik. "He needs a diversion from all the domestic things that are starting to bubble to the surface."

But Wright warned that the war of words between Trump, Rouhani and Pompeo shouldn't be dismissed as a couple of state officials bickering.

Bolton: Trump Told Me Iran Will Pay a Price if It Does Anything Negative

"We certainly ought to be worried about this… we've heard the term ‘mother of all wars' before, and that was with the Iraq issue; and under Bush they used the false information of weapons of mass destruction to justify the… invasion, destruction and occupation of Iraq," she said. "We need to be worried about these things, because US presidents have destroyed other countries on false circumstances," among them Vietnam, Iraq and Afghanistan.

"We do need to worry about it… worried that one more American president is willing to kill hundreds of thousands of people in another part of the world," she told host John Kiriakou.

Although tensions between the US and Iran have been present in past administrations, they have intensified since Trump decided in early May to withdraw the US from the 2015 Joint Comprehensive Plan of Action, an Obama-era agreement that saw the removal of Iranian sanctions in exchange for Iran ditching its nuclear ambitions and allowing regular international inspections to its nuclear facilities.

According to the US Treasury Department, the newly imposed Iranian sanctions will go into effect on August 6, November 4 and November 5.