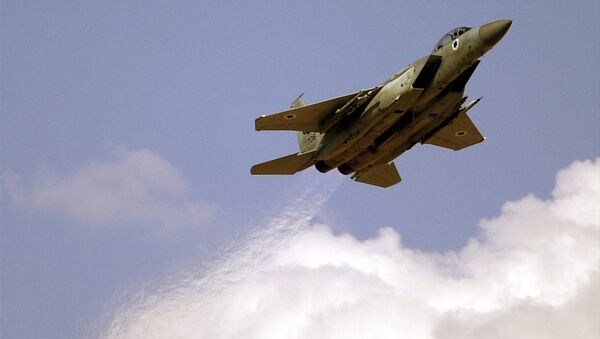 MOSCOW (Sputnik) - An Israel Defense Forces (IDF) aircraft has struck a group of Palestinians who launched arson balloons from the Gaza Strip into Israeli territory, the IDF said on Monday.

"A short while ago, a terrorist squad was launching arson balloons from the northern Gaza Strip into Israeli territory. In response, an IDF aircraft fired towards the squad," the IDF said on Twitter.

No casualties from the airstrike have been reported so far.

This is the second time that Israeli forces have responded to Palestinians' actions with fire since the two parties announced a truce early on Saturday.

READ MORE: Israel May Normalize Work of Only Cargo Crossing on Gaza Border on Tuesday

Israel views the launch of arson balloons into its territories as a Palestinian terrorist campaign and responds with military force, economic sanctions and threats to conduct a large-scale military operation in the Gaza Strip.

WATCH Israeli Aviation Strike Targets in Gaza Amid Uptick in Tensions
On Friday, Israeli forces bombed nearly 70 facilities belonging to the Hamas movement after an Israeli soldier was killed as a result of sniper fire in the border area. After the raid, which lasted several hours, media reported that the two parties managed to reach an agreement under Egypt's mediation.

On Saturday, a top-level source in Jerusalem told Sputnik that Hamas had agreed to accept Israel's demands and stop clashes between protesters and the police in the border area, as well as halt launches of arson balloons.