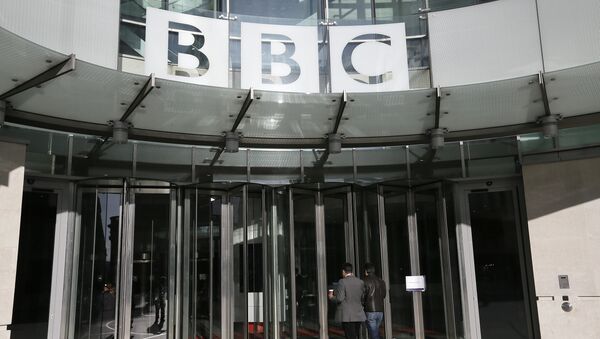 Nikolai Gorshkov
All materials
The British Broadcasting Corporation (BBC) sought help from a government agency to identify "subversives" among its journalists, UK Cabinet papers reveal. They were released today to the National Archives in London.

In 1974, Charles Curran the then Director-General of the BBC, requested a meeting between the BBC's Board of Governors and a controversial government body, the Information Research Department, IRD. 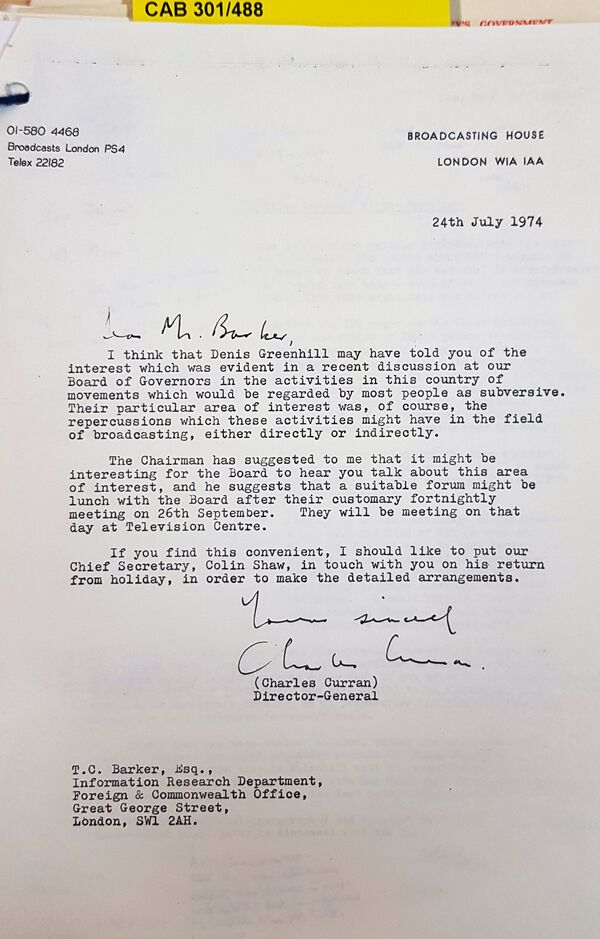 IRD was established at the start of the Cold war in 1948 to "counter the threat posed by Soviet subversive propaganda directed against British (and Western) interests".

It prepared briefs, based on open and not-so-open sources, exposing Communist policies and tactics, and making them available to selected individuals and organizations abroad (via the Foreign Office which IRD was part of) and in the UK, who were able to use them to "inform" public opinion. Later, the brief was extended to cover any movement, organization or grouping that was considered to be "subversive", and not just in the UK but in Europe and the Commonwealth. In its reformulated remit the task to "inform" was replaced by "to exert influence": "to help public opinion more accurately to understand foreign policy issues, and thus exert influence, by non-attributable means, in support of British objectives".

Such briefings were provided on the understanding that they would not be attributed publicly to an official source. Another way of disseminating "anti-subversive" information was through leaking it to "trusted commentators", e.g. journalists.

Throughout its existence IRD's links with the British Secret Service as well as with a private anti-communist watchdog, IRIS [Industrial Research Information Service] were a source of potential embarrassment for successive British governments. The work of IRD, in their own view, was too sensitive because it represented special attention by Government officials to the activities of perfectly legal political parties (like the Communist Party of Great Britain), or movements (like Campaign for Nuclear Disarmament).  In 1969 the mandate of its parent Cabinet Committee was broadened "to embrace all domestic subversive activities…such as those represented by student protests, Black Power, terrorism and Irish extremism, both Republican and Protestant".

IRD's links with the Conservative Research Department, and IRIS, the latter being active in "exposing and countering" leftist tendencies in the Trade Unions meant that even the Labour Party members were not entirely immune from scrutiny.

The origin of the BBC's invitation to IRD lay in the "worries which 2 or 3 emigres from Eastern Europe, who were now working in the BBC, had about the situation in the BBC". This has been a recurrent theme in the BBC with each wave of emigres from the Soviet bloc, hired to work in the World Service, being accused by the "old guard" of being Russian agents. 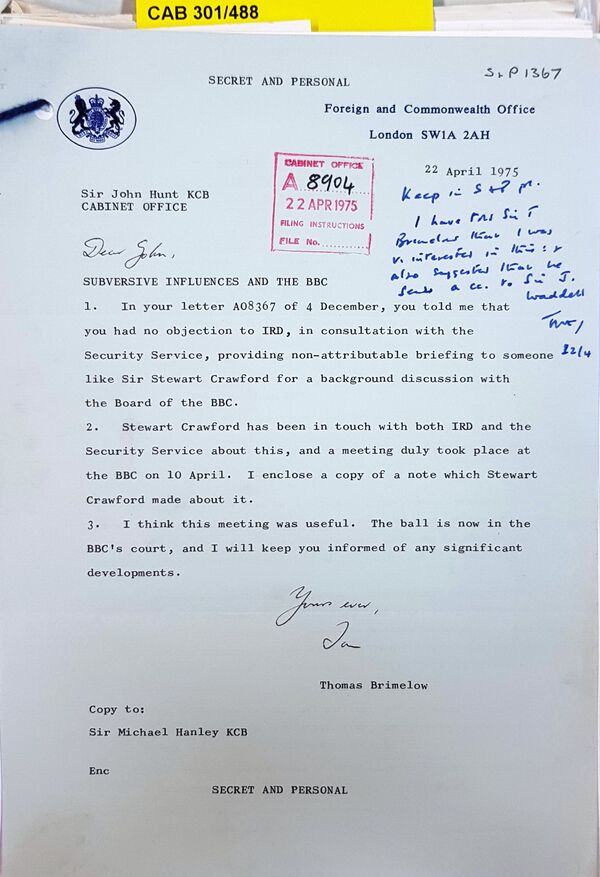 A complaint of "2 or 3 emigres" (out of the World Service staff of over two thousand) was enough for the BBC to seek a briefing from IRD about "classic methods of penetration in the field of broadcasting".

Cabinet officials found the request "politically explosive" and were worried that the "leaky BBC" would cause embarrassment to the Government "in the most undesirable way". But IRD jumped at the opportunity to develop "a discreet dialogue with senior management in the BBC about ad hoc problems in this field, e.g. the connexions with subversive organisations of individual programme producers."

The subject of the influence of subversive movements in the media, especially in broadcasting, wrote Head of IRD T C Barker,

"has long concerned the Security Service and ourselves, and… the Group on Subversive Influence in Public Life has from time to time mentioned the need for an authoritative survey. The BBC's present approach could provide a useful stimulus to such work in this admittedly highly sensitive field".

The field was indeed sensitive not just for the government but for the BBC as well.

According to a secret briefing note on IRD, it engaged in covert propaganda directed mostly abroad. No wonder, IRD though the BBC World Service could prove to be a perfect partner. What happened next is not clear as quite a few pages in the file have been retained by the government.

In 2015 the BBC was accused of "spying" on its own staff after a Freedom of Information request revealed that nearly 150 staff email accounts were accessed or monitored over a period of two years for a variety of reasons. The BBC said they were legitimate disciplinary reasons but the National Union of Journalists was not convinced it was always the case.