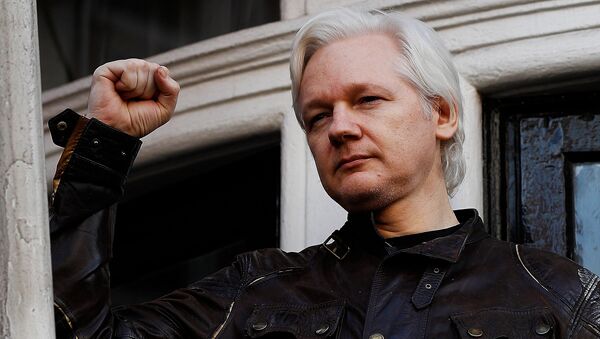 © REUTERS / Peter Nicholls
Subscribe
WikiLeaks founder Julian Assange could be soon forced out of the Ecuadorian Embassy in London and handed over to the UK authorities by the government of Lenin Moreno, according to The Intercept. Speaking to Radio Sputnik, Joe Lauria, an independent journalist and former Wall Street Journal correspondent, shed light on what could happen to Assange.

Sputnik: Ecuador has been hinting at a possible end of Julian Assange's time at the embassy in London. How soon do you think this could happen?

Joe Lauria: Well, it could happen as soon as a signed agreement is reached between President Lenin Moreno of Ecuador and the Foreign Office in London. So, it could be within days or weeks and; it's a terrible development clearly. Here's what new the foreign secretary in London, Jeremy Hunt, had to say: "Any time he wants, he is free to walk out onto the street of Knightsbridge and the British police will have a warm welcome for him." So, is there is any doubt that this is going to happen? I think we have reached this point and now we have to look at what is going to happen next.

Sputnik: Ecuador has been very, very robust the last six years in protecting Julian Assange in the embassy in London. Why have they lost patience after six long years? Can you shed any light on it?

Joe Lauria: Yeah, there was an election and a new government came into power. This one is very friendly to the United States. The other one had guts and stood up to the US and defended Julian Assange's rights. It was unusual situation for someone like Julian Assange to have an elected government anywhere in the world doing that for him, but that's over. Now you have this Lenin Moreno and back a couple of months ago, some high-ranking military officers of the US went down to Quito and spoke with the new government and it's assumed that at that point some kind of deal was made. And this government is a typical government in Latin America over the years, that is doing what the US wants, getting something in return — we don't know what it is — there have been, of course, a wave of left-wing governments over the last few years, or decade or so, in Latin America, but that's changing and it changed in Ecuador. So, there is a new government, that's the main reason.

Sputnik: What is the likely scenario now, given that the UK is in very strong cahoots, in the pocket of the US? They want a trade agreement with them; they are not going to do anything to upset the United States. So it looks very bad for Julian Assange, doesn't it?

Joe Lauria: Well, the British government hates Assange too. I'm talking to you from Alexandria, Virginia. In this very city, in 2012, going back five years now, it's even six years, it's been reported that there was an indictment, a sealed indictment, against Julian Assange. So, if he is arrested in Britain, which is very likely given what the foreign secretary said, he will be charged with a very minor offense, which was skipping bail, essentially, when he went into asylum. Because he knew then that that indictment was probably in existence and he knows the UK will him over to the US, there'll be extradition. Within three months it could probably happen, that would be the length of a sentence for skipping the bail, more or less. […]

Joe Lauria: Well, he'll be in the hands of his lawyers who are going to argue that, for one, the United Nations ruled that he was in arbitrary detention inside the Ecuadorian Embassy and that he should be released immediately and the UK government fought that appeal with the UN, and they lost. But that doesn't matter, it's a good indication of how the British government, and particularly the US government, which as you know, the former CIA director, Mike Pompeo, who is now the secretary of state, made it very clear that he thinks that WikiLeaks is a non-state hostile foreign intelligence service and Jeff Sessions, the attorney general here, has made a priority to have him [Assange] arrested. That will be a very interesting case, if he comes to the US and put on trial, he would be the first journalist since the colonial days when a man named John Singer was put in by the British governor-general over in New York, at the time. No one has ever arrested a journalist for publishing classified information […].

The views and opinions expressed by Joe Lauria are those of the speaker and do not necessarily reflect those of Sputnik.