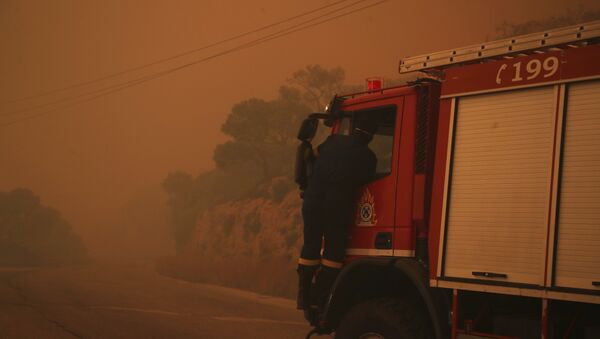 The Greek government announced early Tuesday that more than 20 people had been killed in relation to wildfires that broke out near the capital, Athens, on Monday.

Initially, two large forest fires broke out on either side of the capital early Monday, destroying homes and sending people fleeing toward the sea, where they were evacuated by Greek Coast Guard boats. Attica, the larger region surrounding Athens, declared a state of emergency in both its eastern and western portions.

​Greece called on the European Union for assistance, and said that Cyprus had offered firefighters to help them battle the blazes and Spain offered to contribute aircraft capable of dropping water on the flames.

​Greek Prime Minister Alexis Tsipras cut his visit to Bosnia short to return to Athens, saying the government is particularly concerned by the fires occuring simultaneously. "We are doing everything humanly possible to try and tackle these fires," he said. Upon his return, he said more than 600 firefighters and 300 vehicles were working to extinguish them.

Dimitris Tzanakopoulos, a government spokesperson, said early Tuesday, Greek time, that some 69 people had been hospitalized and many are in critical condition.

It's unclear how many people have been forced to evacuate due to the fires. Vangelis Bournous, mayor of Rafina, a town about a six-hour drive from Athens, said he believed some 100 homes had been burned.