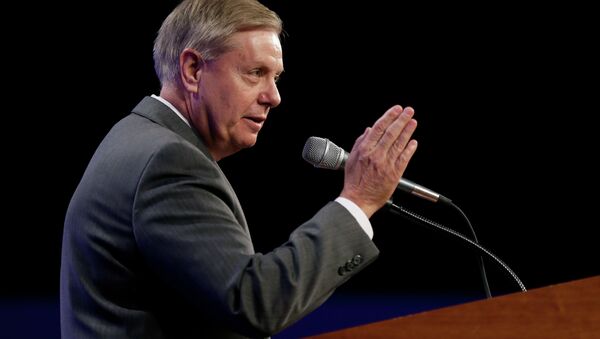 The two senators called Sunday for new sanctions be imposed before the proposed second meeting between the US and Russian leaders takes place.

US Senators Lindsey Graham and Marco Rubio are calling for new sanctions to be imposed on Russia, citing — as always — allegations of Russia's meddling in the 2016 presidential elections. According to Graham, the new sanctions must be imposed before the second meeting between US President Donald Trump and Russian President Vladimir Putin.

"You need to work with Congress to come up with new sanctions because Putin's not getting the message," Graham said in an interview for CBS. "We need new sanctions, heavy-handed sanctions, hanging over his head, and then meet with him."

US Oil Companies Allegedly Lobbying Congress Not to Ramp Up Russia Sanctions
Trump came under attack by critics after the summit with Putin in Helsinki earlier in July. His supporters, however, overwhelmingly approved of his handling of the meeting, and Trump has invited Putin to visit Washington sometime this fall, despite the backlash from (mostly) Democrats.

Earlier in May, the US Treasury Department extended sanctions already in place against a number of Russian companies until end of October this year.

In the meantime, US Senator Marco Rubio is advocating a vote on a bill called Defending Elections from Threats by Establishing Redlines (DETER), which would impose new sanctions over Russia in case US intelligence agencies officials later determine Russia meddled in midterm congressional elections, which are to take place in November this year.

"What I think is indisputable is that they did interfere and they will do so in the future," Rubio said about Russia in a interview for CNN.

"If our bill passes and the director of national intelligence says they interfered in 2018, these very tough sanctions will hit them. So Putin knows going in what the price of doing so is."

Huntsman Reportedly Refuses to Resign Amid Calls to Quit Over Helsinki Summit
The bill will also make imposing new sanctions more automatic, requiring simply a report by the US Director of National Intelligence to Congress that election meddling took place. As per the bill, the DNI's word would make imposing sanctions mandatory. The sanctions would be triggered within 10 days after any meddling is said to have been found.

The bill has been backed by Senate Majority Leader Mitch McConnell, who called it a potential step Congress could take to "push back against Russia," Reuter reports. Senate Minority leader Chuck Schumer also called for sanctions, as well as for other deterrents.

US oil and gas industry companies are lobbying against tougher sanctions on Russia, fearing the sanctions might jeopardize their investments in the world's biggest oil producing country.

Following the 2016 election that swept Trump into the Oval Office, the US intelligence community claimed Russia interfered in the contest through cyber-attacks and messaging on social media networks, with an aim to boost Trump's candidacy.

The Kremlin has repeatedly denied that Russia tried to influence the presidential election, and the claims have been met with skepticism by some in the US.