'Get the F*ck Out of This City': Seattle Teen Attacked Over MAGA Hat (VIDEO) 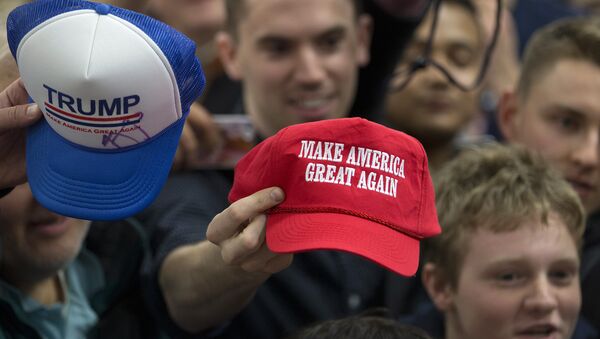 A teenage Republican was apparently physically abused by a man and a woman in Seattle for wearing Trump's trademark red "Make America Great Again" hat while standing outside.

According to the description of the video teenager Ashton Hess uploaded to YouTube July 18, he was waiting for a bus with his family when a woman suddenly hit him on the head from behind, knocking his iconic red hat to the street.

Gigantic 'Trump Chicken' Clad as Prisoner to Sail Along San Francisco Coast
The women then threw the hat to a person sporting long green hair, who spat on the hat before shouting "get the f*ck out of this city." The footage does not show the alleged assault, but its aftermath, as Hess walks after the green-haired person, asking for his hat back.

"He continued to curse at and flip off my family," Hess' video description reads. "He was quick to run away after my dad, my brother, and I started walking after him."

The woman is heard saying, "You're not welcome here," to Hess as well.

The video has received almost unanimous support in the comments section, with many people praising Hess' restraint regarding his assailants.

"Great show of discipline and restraint against that squid. Keep your head up young man! #MAGA﻿," one comment reads.

Many commenters said that the incident was a criminal assault and suggested the teen file a complaint with police.

"I would definitely file a police report and charge him…he won't be hard to find…﻿," a comment reads, referring to one of the attacker's prominent green-dyed coiffure.

Earlier in July, a somewhat similar incident took place in Texas, in which a bartender ripped a MAGA hat off a 16-year old and threw a drink in his face.

"You ain't supporting sh*t n**ger," the bartender said. As he left with the hat, he added, "This is gonna go right in my f*cking fireplace, b*tch."

According to victim's own words, the bartender didn't try to initiate a conversation or to discuss his political views, but decided instead to assault him straight away.

The bartender was subsequently fired. The bar issued a statement condemning the assault and saying their enterprise should be a safe space for people of all ethnicities, sexual leanings and political stances.