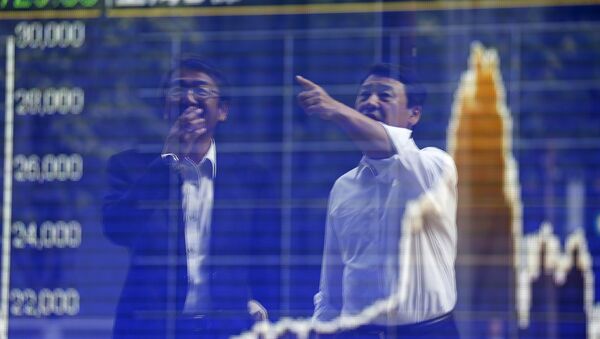 Kristian Rouz — Japanese Finance Minister Taro Aso says he is concerned with the ongoing tightening cycle in the monetary policies across advanced economies. Aso said higher central bank interest rates in the US, the UK, and — quite possibly — the Eurozone and Japan could exacerbate capital outflows from emerging markets, including mainland China.

A prospect of disinvestment could force developing nations to deepen their currency devaluations in order to support their exports and international competitiveness, possibly spurring another "race to the bottom," akin to the global wave devaluations of 2015.

Speaking on the sidelines of the G20 forum in Argentina, Aso urged greater coordination in monetary policies worldwide, which he believes could help erase some of the existing imbalances in global trade.

"Excessive current account imbalances should be resolved through multilateral, not bilateral, framework," Aso said. "The matter should be dealt with through macroeconomic policy and a structural reform by rebalancing savings and investments, instead of imposing tariffs."

Trump Says China's Currency 'Dropping Like a Rock'
Aso stressed higher interest rates often support the appreciation of the national currency, whilst also encouraging the influx of investment capital into the countries with elevated borrowing costs.

Subsequently, the ongoing capital flight from mainland China could backfire on other regional economies, including Japan, some of the exports of which reach the international market through China.

Additionally, Aso addressed the global trade wars, stemming from the US push to refurbish the international trade system. The Japanese Finance Minister said heightened trade tensions are unlikely to benefit any of the countries involved, and could hurt the global economic growth as well.

"Inward-looking policies would benefit no country," Aso said, adding, however, that global trade must be based off the "based on free and fair rules."

Some of his remarks echoed sentiments expressed by US Treasury Secretary Steven Mnuchin, who has proposed that the US, EU, and Japan strike bilateral free trade agreements, directly benefitting each of the parties involved.

READ MORE: China Aims to Boost Trade Interest in Eastern Europe Amid Trade Row With US

Whilst the EU and Japan signed a bilateral trade deal just days ago, Secretary Mnuchin said he is "very hopeful" similar bilateral deals could be concluded between the US and its main trade partners.

"I'm encouraged by the EU's trade agreement with Japan," Mnuchin said, adding that a possible agreement between the US and the EU should reach beyond just lowering mutual tariffs. "This has to be about dropping non-tariff barriers and subsidies as well. This has to be a deal with its entirety," the Treasury Secretary stressed.

Chinese Central Bank Drops Yuan Exchange Rate to New 2018 Low
The EU has already retaliated against US tariffs on industrial metals, but Japan has so far abstained from reciprocating — despite some of its producers, including Kobe Steel, having been affected by the Section 232 measure.

Japanese officials are inclined to side with the US on trade, and appear to be willing to wait out the current turmoil. According to governmental figures, global trade tensions haven't affected Japan's economy so far, meaning Tokyo has some wiggle room to figure out the best approach to negotiating with the US.

Bilateral talks between Aso and Mnuchin during the ongoing G20 summit are expected to produce several statements, which could point to the future of the trans-Pacific trading relations.