Registration was successful!
Please follow the link from the email sent to
https://sputniknews.com/20180722/butina-father-defense-1066591235.html
Maria Butina's Father Opens Up on Her Life in US
Maria Butina's Father Opens Up on Her Life in US
Maria Butina’s arrest ahead of the Putin-Trump meeting was a clear attempt to minimize the effect of the summit, Foreign Ministry spokeswoman Maria Zakharova... 22.07.2018, Sputnik International
2018-07-22T14:41+0000
2018-07-22T14:41+0000
2018-07-22T14:47+0000
/html/head/meta[@name='og:title']/@content
/html/head/meta[@name='og:description']/@content
https://cdn1.img.sputniknews.com/img/106643/97/1066439704_0:0:2482:1403_1920x0_80_0_0_042e7c96a07db366d53724d33d7fb947.jpg
VoVo
ivanwa88, Sorry, but you are wrong. It gives her no rights within society, but only as a student within the University. I am a former University Professor and Administrator, so I know about this better than you. Working outside the University requires additional registration.
0
Bobby
Russians will slowly need to understand that the fascist powers that be, which hold the reins of the government and the US judiciary behind the deceptive but elaborate facade of catch embellishments like freedom of expression and democracy -- are the very same oligarchs Ziofascists whose forerunners had wreaked genocide of over 40 million Russian Christians in the past century. These forces, both men and women, bear irreconcilable genetic animosity towards the Russian civilisation; they will fight the Russian civilisation by hook and Crook with all dirty tricks in their arsenal to its extermination, or, wait, until they get exterminated from a natural calamity ala Sodom and Gomorrah themselves. Maria Butina has done no wrong in the US. She has only maintained her personal opinions on various topics in her social interactions with fellow humans from various walks of life in the US. Unless a person is in prison in solitary confinement, he or she would of necessity be interacting with myriad human beings as a consequence of laws of physics such as those dealing with Brownian motion, and in consonance with the postulates of sociobiology. Such interaction is inevitable, as much as the breathing in of air and the drinking of water is unavoidable so long as one continues to live on this planet. Now, it is the right of Ms Butina to have held on to her cherished personal opinions without getting swayed or brainwashed by the propaganda in which American corporate-funded government agents must indeniably have inundated her--- in a systematic attempt to poison her against her homeland and to eventually recruit her as an agent saboteurs for the American imperialist oligarchy in Russia. If the American female judge Justice Deborrah feels that Ms Butina has committed a serious crime by holding on to her own opinions instead of yielding to the counterviewpoints of American CIA/ corporate- empire- agents stalking her to brainwash her into betraying her motherland Russia, then this judge Deborrah is too hot for me to handle. If this girl Deborrah feels that an 'unregistered' Russian must not hold on to her viewpoint but must of necessity parrot the indoctrination being thrust her way by CIA agents in personal conversations with her, otherwise her interactions will be branded as sabotage of American democracy by a foreign 'agent' of the Russian government; then I must say that the spineless American goyim are already in deep trouble. These goyim are dumb to have women like Deborrah adjudicating over them, without realising that zombie agents of Ziofascist like Deborrah have already practically reduced the American goyim to the status of the Red Indians in America. Talking of symmetry, extending the same absurd logic of stone aged Judahic-Amorite jurisprudence which governs America today to the other side, will of necessity mean that all of American pastors, evangelists and professors teaching at MBA programmes in the third world, especially those subdepartments which are grandiosly labelled policy research wings of MBA institutes and which are fronts whereby Harvad professors dictate legislation to third world governments, will inescapably become deserving of the death penalty. The unholy liasons of Jewish American lobbies with brahminist organisations of Dravidian extraction operating in India, to forge common alliance against perceived common threat from Islam, would suffice to make those Jewish pressure groups specialising in political intrigues, guilty of the capital crime of unholy sabotage of the politicoscape in India by unhealthily influencing public opinion among a section of Dravidians to the detriment of tranquity and cohesion in Asian societies. One feels sincerely sorry for Ms Butina, but there is nothing to help save innocent Russians like her from innate 2000BC Judahist-Assyrian Ziofascist tyrrany except the iron clad Soviet fist which Nikita Khrushchev had thumped at Israel, France and the UK in the 1950's. Russia needs to reset its priorities and outdo the West in military tech urgently and enormously, else Russia will be fated to become what the American goyim have already become at the hands of the Ziofascist robbers-- serfs in their own homeland like the Red Indians. The Ziofascists showed no mercy to their own benefactors and Refuge givers, the Canaanites whom Mosaikiyah ordered his fanatic fans to slaughter supposedly upon the orders of YW; likewise the Ziofascists have no soft corner for Russians despite having ruled over them like despots during the reign of evil dictator LAVRENTI BERIA and having indulged in all profane enjoyments of this world at the cost of their Russian goyim hosts-cum- subjects. Thanklessness thy name is YW.
0
4
us
Sputnik International
feedback@sputniknews.com
+74956456601
MIA „Rosiya Segodnya“
252
60
2018
Sputnik International
feedback@sputniknews.com
+74956456601
MIA „Rosiya Segodnya“
252
60
News
en_EN
Sputnik International
feedback@sputniknews.com
+74956456601
MIA „Rosiya Segodnya“
252
60
1920
1080
true
1920
1440
true
https://cdn1.img.sputniknews.com/img/106643/97/1066439704_0:0:2482:1559_1920x0_80_0_0_912c78b672ed9d4cee8cb8148fb10467.jpg
1920
1920
true
Sputnik International
feedback@sputniknews.com
+74956456601
MIA „Rosiya Segodnya“
252
60
Sputnik International
feedback@sputniknews.com
+74956456601
MIA „Rosiya Segodnya“
252
60
world, news, us, us, maria zakharova, maria butina, valery butin, federal bureau of investigation (fbi) 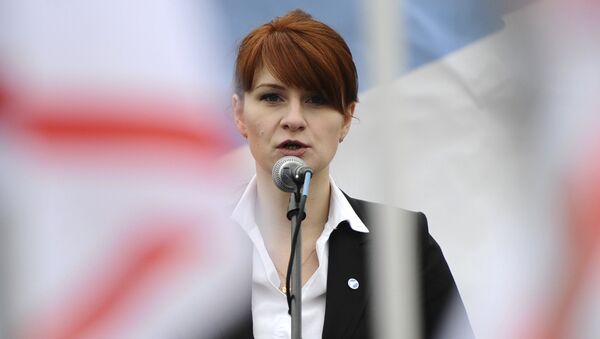 © AP Photo
Subscribe
Maria Butina’s arrest ahead of the Putin-Trump meeting was a clear attempt to minimize the effect of the summit, Foreign Ministry spokeswoman Maria Zakharova said.

The father of Maria Butina, a Russian national, detained in the US on charges of acting as a foreign agent in addition to conspiring to be one, insists that his daughter has done nothing wrong and had spent most of her time in the US studying.

"All she did was study, working very hard on a daily basis. Naturally, the pressure was high because English is not her native language, full of unfamiliar terms. What I’m saying is that she was studying almost round-the-clock,” Valery Butin told Rossiya-1 television.

He added that the last time he spoke with Maria was on July 14,  a day before she was arrested.

“She had to meet and contact many people just as her future profession calls for. Well, it looks like some people in some places circles got interested. She never did anything illegal, I can vouch for that,” Valery Butin emphasized.

Lavrov Calls for Swift Release of Russian Citizen Butina Arrested in US
According to the press secretary with the Russian Embassy in Washington, Maria is having a hard time adapting to the conditions of incarceration.

“But she is still holding out as she knows she is innocent,” the official said.

In Moscow, Foreign Ministry spokeswoman Maria Zakharova said that Butina’s detention just ahead of the Russian-US summit in Helsinki was a clear attempt to minimize the positive outcome of that meeting.

“It seems that the US FBI, instead of dealing with its basic duties to combat crime, is carrying out a plainly political order," Zakharova said.

Maria Butina, 29, is a student from Russia who has recently graduated from American University in Washington DC with a Master’s Degree in International Relations.

Last Sunday, US authorities arrested and charged her with conspiracy to act and acting as a foreign agent.

On Wednesday, Butina denied both charges in federal court in Washington but was remanded in custody without bail, as she is considered a flight risk.

If convicted, she faces up to 15 years in jail.

Butina, a longtime advocate of gun rights in Russia, is believed to have worked with the US National Rifle Association (NRA).

000000
Popular comments
ivanwa88, Sorry, but you are wrong. It gives her no rights within society, but only as a student within the University. I am a former University Professor and Administrator, so I know about this better than you. Working outside the University requires additional registration.