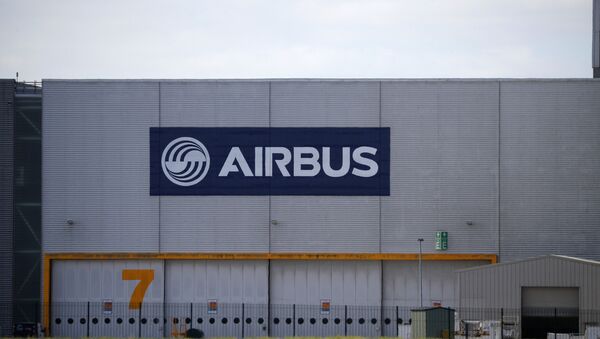 © REUTERS / Phil Noble
Subscribe
The French-based aircraft manufacturing giant Airbus previously issued a stark warning that the company would pull out of the British market if the UK leaves the European Union without a deal on trade arrangements.

The chief executive of Airbus Tom Enders has sought to create a pan-European military jet mammoth to be able to compete with the United States, The Sunday Times reported.

It’s time to “seriously look at consolidating and coalescing efforts eventually to one” – this is the message Enders came up with, having announced that Airbus was open to a merger of its jet fighter business with that of British BAE Systems.

Brexit May Damage '40 Years of Tremendous Success' at Airbus – Official
Enders got a chance to examine BAE’s futuristic jet fighter, known as Tempest, which was unveiled last week to the international defense and aerospace industry and which the company plans to send into the skies by 2035.

The Airbus CEO is interested in the creation of sixth-generation fighter jet, and currently, three aircraft – BAE’s Eurofighter Typhoon, French Dassault’s Rafale and Swedish Saab’s Gripen – are contending for contracts and investment. Enders, however, has suggested that the BAE jet should be combined with a French-German project to design the futuristic stealth fighter.

“There’s just no room for three different programs, not even for two. We really want the next generation to be competitive with the Americans and we need to consolidate that into one. That is the imperative,” he said.

He further noted that the key players needed to “align industrial forces to create one big program” that could have “a significant chance of winning big export orders outside Europe.”

In 2012, Enders made an attempt to merge Airbus and BAE to create a 38-billion-euro defense and aerospace behemoth, but German Chancellor Angela Merkel dealt a coup de grace to the deal, as she was concerned about the passenger jet maker expanding its defense role.

As for now, Enders is reportedly seeking to create a “European military aircraft company,” that could potentially unite the defense aerospace divisions of Airbus, BAE, Italy’s Leonardo, France’s Dassault and Sweden’s Saab.

“I’m a veteran of trying to merge with BAE. I’ve tried at least three times in the past 20 years – and failed. It does not, necessarily, need to take the form of a bilateral merger – it could, indeed, be a sectoral merger like an MBDA [the missile maker jointly owned by BAE, Airbus and Leonardo], where the various military aircraft businesses are split off and put into one company,” he said.

Airbus, Rolls Royce Move to Stockpile Parts Amid No-Deal Brexit Fears – Reports
Addressing the prospects of the collaboration after the UK’s divorce from the EU, Enders said that it was “in the vital interest” of both parties “in terms of security cooperation, defense and foreign policy cooperation that we stay as close as possible.”

It seems, however, that Enders will not have to deal with post-Brexit cooperation, as he is due to retire next year.

In June, Airbus announced that a no deal Brexit would force the aircraft giant to reconsider its long-term position in the UK, putting at risk some 14,000 jobs in the country. The statement came amid uncertainty over trade relations between the UK and the EU after Brexit is delivered.

“This scenario would force Airbus to reconsider its investments in the UK, and its long-term footprint in the country, severely undermining UK efforts to keep a competitive and innovative aerospace industry,” the plane maker said, describing the outcome of no deal as “catastrophic.”